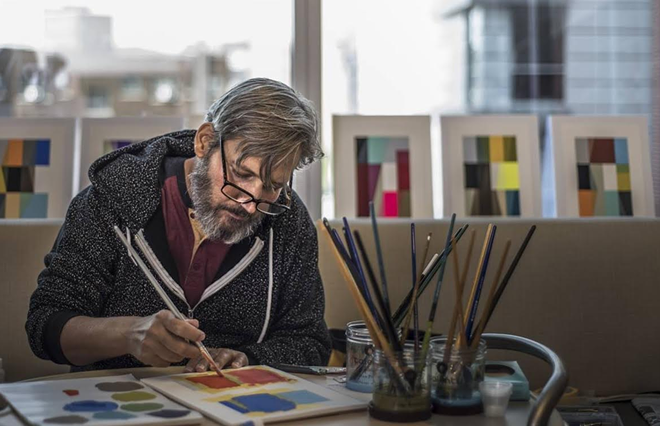 Dan Tranberg painting in his hospital room. Photo by Jerry Birchfield. Posted on Tranberg’s Instagram profile (@dantranberg) on May 23, less than a week before he passed away.
The art community is deeply saddened by the news this week of the passing of local painter, critic, teacher and author Dan Tranberg. Tranberg’s sister announced on social media that her brother died at University Hospitals Health Center in Broadview Heights on Sunday of heart failure as a result of side effects from his long battle with cancer.

Dan Tranberg was born in Newark, NJ on March 5, 1964. Before moving to Cleveland, he received a BFA in ceramics from Northern Illinois University in 1988, before earning his MFA in drawing and photography from Purdue University in 1991 and later studying contemporary art theory and criticism in Chicago at the University of Illinois.

Tranberg lectured and taught painting as an adjunct faculty member at CIA for more than 15 years. One of the region’s most respected art critics, Tranberg began writing for the Plain Dealer in 1991. Other publications include Art in America and Bomb, as well as locally for the Cleveland Free Times. He published more than 750 articles on art in local, national and international publications, and his personal work has been exhibited in more than 40 exhibitions.

Considered an expert in his field, Tranberg literally wrote the book on painting theory, Acrylic Fusion: Experimenting with Alterntative Methods for Painting, Collage and Mixed Media (Quarry Books, 2012). In 2004, he was awarded an Excellence in Journalism award, as well as Individual Artist Fellowships from the Ohio Art Council in 2002 and 2007. As a painter, his last series explored hard edge geometric abstraction. Tranberg said his current work “highlights bold and subtle interactions of pure color, demonstrating and celebrating the endlessly complex ways in which color can be perceived.”

His paintings are represented by the Bonfoey Gallery in Cleveland, and have been included in recent exhibitions at American Greetings’ Gallery W at Crocker Park, the Galleries at Cleveland State University, 1Point618 Gallery in Gordon Square and more throughout Cleveland. In early 2014, Progressive Corporation purchased 13 of his paintings for their renowned corporate art collection. Tranberg continued painting prolifically, even during his last hospital stay, posting a photo of himself painting in his hospital room on social media, calling it his “new studio.”

Tranberg is survived by his parents, William and Delores of North Royalton, his brother William of Minneapolis, two sisters, Maria Rowlette of North Royalton and Michelle Finkle of Parma, as well as two nephews and three nieces.