Image via stefanybee/Instagram
Com Truise playing his vintage robotic synth music to an enthuastic crowd at Grog Shop last night.
Co-headlining tours are rare for small venues like the Grog Shop. So it was refreshing to see Com Truise and Warp Records veteran, Clark turns playing on Grog's small stage to a packed and very receptive audience Friday night.

, whose real name is Seth Haley, is on Ghostly International, while Chris "Clark" Clark has been releasing records on Warp since 2001. But the unifying element between the two is Adult Swim. Their music has been featured on the network's famous bumps, and even compilation albums, throughout the years.

Grog's atmosphere was perfect for the type of electronic music you'd expect to hear from these two: small, dark, and seedy. Com Truise played first and offered a more audio-visual experience with multiple vertical screens flashing graphics behind him, while he continued a steady rhythm of heavy melodic synths and beats.


@comtruise tearing it up last night! Thanks for being such a chill dude with your fans, and making music that takes us to so many different worlds through your art. Amazing job!


The neon-lit graphics morphing on the screens behind  were the perfect compliment to his '80s style nostalgic music. It's as if his album art came to life behind him, offering a psychedelic trip through a VHS filtered version of Tron. Here, there's a similar quality to Austin-based band Survive, who scored Netflix's Stranger Things opening theme.

Clark's setup was more minimal, but was also missing a key component on this tour. Other shows have included dancers  — there's even a trailer for his tour, giving you a taste of Clark's current show — but I assume Grog Shop's size was not able to accommodate the theatrics. 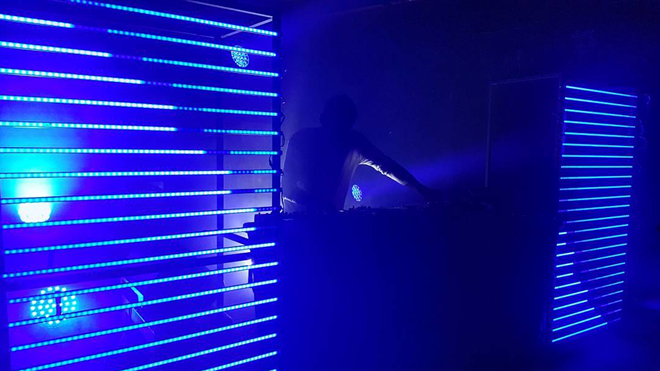 Image via kab00m780/Instagram
Clark performing behind an eginma of lights.
Armed with two columns of blue lights at each side, Clark's set entered into uncharted territory. Without the spectacle, there was more of a focus on the music and his live reinterpretation of his latest album, Death Peak. Things started off slow, like scoring a film, with noises fading in and out as he started to play album opener "Spring But Dark."

His hands are always all over the control board when he performs. Describing what he does on stage to The Skinny: "I'm literally I’m doing every single thing. Everything that happens on stage is being played and created live."

Just like his albums, Clark's set started to shift, always keeping you guessing as to what is coming next. He's not afraid to cut the beat off and play with ambient textures instead. At one point he crouched behind his table to check his phone because a fire alarm went off. I thought it was all part of his sonic landscape, oblivious to what happened elsewhere. The show kept on going though and Clark never spoke a word to the audience.

The crowd seemed transfixed on him the whole time with anyone hardly talking and everyone packed together trying to get as close as possible. Clark's music is danceable through his lush textures, and during the climax of his show he played one of his more popular tracks in recent years, "Winter Linn." With its wonky synths and pulsing rhythm, backed by frantic flashing lights, it made for an exciting climax.

Clark slowed things down for his final track and Death Peak closer "Un U.K." providing melodic pitched vocal samples over a soft beat and arpeggiated synths. Just as his set started Clark's music slowly transitions back into that film score- ambient noise, until he finally walked off stage.