The Great Lakes Are Being Poisoned By Poop 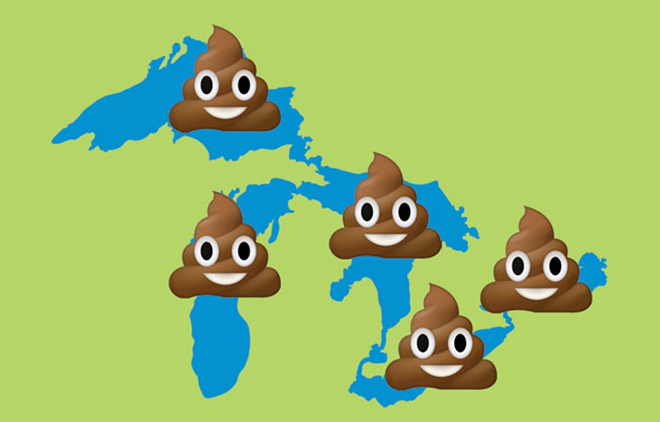 Pam Taylor, a woman I admire a great deal, lives in a rural community in Lenawee County, not far from the Ohio border, a place where her family has been farming since 1837.

You wouldn't call her lifestyle wild and crazy. A retired teacher in late middle age, she celebrated Memorial Day by taking her 88-year-old dad to a parade in a nearby small town, and driving him to visit family graves in nearby cemeteries.

"Then we will get some barbecued chicken at the Blissfield American Legion, and we'll have the strawberry shortcake I'm going to make today," she said the day before.

Yet not only Detroit's comeback, but our very long-term survival, may depend on policy makers finally listening to her.

Taylor is one of the main authors of a new report, "A Watershed Moment," published late last month by several groups and led by the one for which she is a full-time, unpaid volunteer: Environmentally Concerned Citizens of South Central Michigan. Barely seven pages long, the report presents ample evidence that our water supply is being slowly poisoned.

Poisoned, that is, by an astonishing 3.3 billion gallons of animal poop and urine produced every year by Michigan's 272 factory farms, which technically are called CAFOs, for "Concentrated Animal Feeding Operations."

These are places where nearly 21 million animals are kept in close confinement, usually in almost unspeakable conditions, being fattened as fast as possible for slaughter.

Many of these animals never see the sun or spend a moment outside. What they do before they die is eat, piss, and poop, and most of what pours out of them is kept in huge cesspools bizarrely called lagoons. Eventually, most of this stuff gets mixed with water and spread on fields as fertilizer.

That's where the problem starts.

We aren't talking about bacteria, diseases, and germs, or even horrible odors. The problem is simply phosphorous.

Animal excrement is filled with phosphorous. Far too much of it makes its way into the water system, then runs off into Lake Erie, where it becomes food for algae; specifically, those huge algal blooms which often clog Lake Erie waters.

The blue-green algae blooms are gross and unsightly, but that's not the real problem. They also carry cyanobacteria whose toxins can be deadly to other living things — including people. The nation learned about this for the first time in August 2014, when cyanobacteria got into Toledo's water.

For three days, residents of that Ohio city and some parts of Monroe County, Michigan, were cautioned not to drink or even bathe in the water. That eventually subsided, and hasn't happened again, but only a fool would think it won't.

For proof, one need only look at the River Raisin, which flows through Monroe County and directly into Lake Erie.

"While the level of total phosphorus in the Raisin has declined greatly over the years, the amount of dissolved phosphorus ... [the stuff that] actually 'feeds' the toxic algae has almost doubled since the 1990s," "A Watershed Moment" says. "So, unless efforts are better targeted, it is just a matter of time before another toxic mass floats into another municipal water intake somewhere in the Great Lakes. Where will it happen next?"

While Lake Erie may seem the most likely disaster zone, it could easily come elsewhere. CAFOs in Saginaw Bay-Lake Huron area produced the most manure last year.

The southeastern Lake Michigan area is where more than half of all the state's factory farms are; this area gets both the most subsidies and the most environmental citations.

What's most bizarre — and what drives environmentalists like Taylor crazy — is that while the federal government is spending tons of money trying to figure out how to prevent phosphorous from leaching into the lakes, it is doing that at the same time they are spending even more millions giving subsidies to factory farms.

The definition of a CAFO is complex, and based on something called an "animal unit" of weight.

For dairy cattle, for example, 700 animals constitute a CAFO. The rules are slightly different in other states, but in practice, cattle account for four-fifths of the manure.

CAFOs are subject to some regulations; Meindert Van den Hengel, who owns a large hog CAFO near Van Wert, Ohio, told me in March the main offenders were large farms which have just a few animals too few to be legally considered a CAFO. Taylor told me there was some truth in that.

"But that's really not a major factor," she said. Nor are all CAFOs model citizens. According to the study, various Michigan factory farms have drawn a total of 644 environmental enforcement actions by the state through the end of last year.

But they are all still open for the business of pollution and slaughter. "A Watershed Moment" concludes with a number of policy recommendations, including banning spreading CAFO waste on frozen or snow-covered ground, since that's when it is most likely to run off and end up en route to the lakes.

The authors also call for a comprehensive national and international policy governing pollution across the entire Great Lakes basin region, and on through the St. Lawrence Seaway.

For her part, Taylor would like fewer subsidies given to CAFOs and more to small fruit and vegetable growers.

But her main policy solution would be both radical and utter common sense: "We should require municipal-quality sewage treatment plants for animal waste," she said. That would undoubtedly cost the farmers and the rest, but as she notes, they've been getting subsidies all these years.

Right now, we are allowing farmers to pour billions of gallons of untreated animal waste into our soil. There are twice as many animals in factory farms than human beings in this state. Would we allow someone to do this with human poop?

You know the answer. Roman Catholic nuns aren't often thought of as screaming liberal environmentalists. But within a day after "A Watershed Moment" was published, I got a message from Sister Patricia Siemen, the prioress of the Adrian Dominican Sisters, strongly supporting what it said.

"All life depends on water. We have a moral and spiritual obligation to protect our waterways and desire to stand in support of responsible farming," Sister Patricia said.

Good for her. Now what's needed is to keep up the pressure on our policy makers before it's too late.