Warpaint Keeps Things Dark and Moody at the Beachland 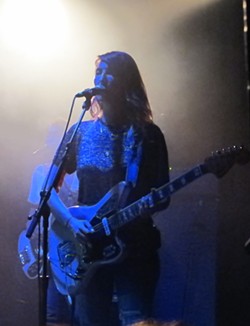 Since the band was backlit by simple white lights, you barely could make out the shapes of their faces as their dark tonal pulse began filling up the room. They opened with “Heads Up," the title track from their latest album, and the song wove into the atmospheric “Krimson” and “Undertow.”

As the night continued, their melodic harmonies and thumping beats took center stage as they remained shadowy silhouettes swaying to the music. One song bled into the next as the venue transformed into a somber echo chamber. The packed room swayed along with them, vibing on songs like “So Good," “Beetles,” “Whiteout,” “Dre” and “Bees.”

A few times during their set, the overhead disco light turned on and started to twirl, making the room feel like it was underwater, and patrons all became mermaids floating in a sea of sorrow.

But the majority of the set was visually dark and moody, matching their sound. They resembled the album cover artwork of Heads Up, musicians playing in the dark, as if to say don’t look at us, just hear us. Many fans closed their eyes as hypnotic tracks like “The Stall” washed over them.

Songs that broke that trance were the more upbeat and danceable “Love Is To Die” and the fun and optimistic “New Song.” They ended the night with “Disco//very.”

Fronted by Jason Franxis, openers deafmute delivered a sweet spirit. He even had the crowd do some breathing exercises before starting his set. Haunting, intense and kind of spooky, Franxis hypnotized the room with his meditative electronic music and River Phoenix-like face. Warpaint's Kokal even came onstage to sing with him on his exceptional track “Fortitude.”