Guide to Kulchur Bookstore Will Reopen in New Location This Month

Sam Allard / Scene
At Lorain Avenue and W. 52nd Street, Guide to Kulchur will live again. Founder RA Washington told Scene he plans to open the bookstore and an adjacent black box space later this month. And this time, with the assistance of some local foundations sympathetic to his mission, plus the addition of a board, Washington hopes to secure official non-profit status, which he views as key to long-term sustainability.

Guide to Kulchur first arrived in 2013, in a small retail space two doors down from the Capitol Theatre on W. 65th Street. It was owned and operated by Washington and his wife Liz Bly and was billed as "a place where classic literature, pulpy-campy fiction, theory, and zines and the DIY ethos can coalesce." A zine-making co-op and event space were housed downstairs. In 2015, Washington, who'd separated from Bly, moved to a slightly larger space on Detroit and W. 59th. But in October of last year, the money ran out. The print-shop equipment was broken or breaking. The shop just wasn't sustainable as a for-profit venture.

Washington is these days more subdued, focused on the store itself and on his band, Mouring [A] BLKstar. When Scene spoke with him at the new location Tuesday, he quietly sorted through stacks of fiction and reflected on his vision for the store. One of Washington's initial goals was to provide a kind of salon for radical thought and action, a meeting space for diverse and marginalized voices. The basement space in Guide to Kulchur's first location hosted readings and discussions and alternative musical acts. 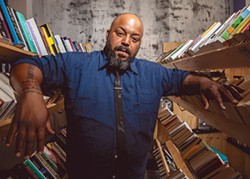 Photo by Frank J. Lanza
RA Washington (July, 2014).
Washington says he is dedicated to continuing that work, but being "more intentional" about the programming in the black box space, which will be named in honor of the Cleveland poet Russell Atkins, a pioneer in avant-garde lit. Washington says a strategic plan is actively being developed for the nonprofit, and he intends to stick to the plan.

"I finally had to realize there were some things I couldn't do," he says. (The oddest adjustment will be becoming an employee at an organization that he conceived.) "But a space like this should have every opportunity to exist as an institution, and shouldn't be limited to the lifespan of one person or one vision."

In Washington's view, a curated bookstore is a crucial component of the larger enterprise — and he says he'll be manning the store personally a lot — but it's only the most visible element of the nonprofit's three central program areas: providing books to prisoners; operating GTK Press, a small press for insurgent literature and marginalized voices; and curating speakers and performers in the black box space.

"People need space to collaborate and discuss, and they need to invest in their training and learning as activists so they understand intersectionality and how to bring diverse voices to the table," Washington says. "We represent a place to do that."