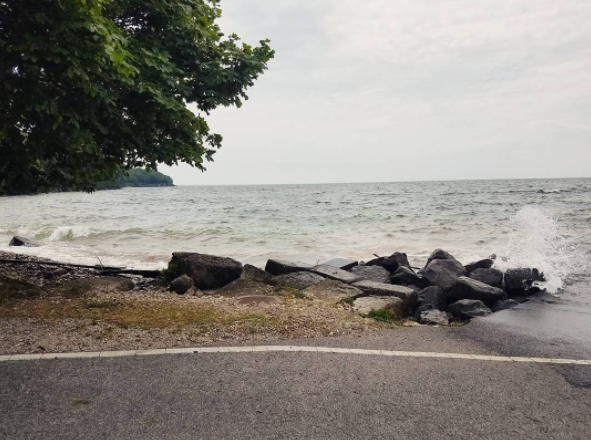 Photo via rachels.lens/Instagram
A 19-year-old died at a Put-in-Bay marina on Friday, after he jumped into water with an electric current to help his father and dog.

The incident occurred around 6:30 p.m. at Miller Marina, where the Currie family of Dublin, Ohio, had just docked their boat. According to an incident report, after the family plugged in the marina's shore power to the boat, their dog Daisy fell into the electrically-charged waters. Jeffrey Currie leaped in to rescue her.

"The second my toe hit the water jumping in, I knew there was a current," Currie told Cleveland 19 News. "I felt like I was hit with a stun gun."

When Evan Currie and his younger brother saw them both struggling, they jumped in to help. Jeffrey Currie said his son managed to shout "electricity" between convulsions from the current.

At the urging of observers, Mrs. Currie unplugged the boat's power. After the brothers, father and dog returned to the boat, Evan was unresponsive. He was administered CPR and taken to Port Clinton, but according to the Ohio Department of Natural Resources (ODNR), passed away at the scene.

An investigation by an electrician, hired by ODNR, found that all power outlets nearby were working properly at the time.

While Currie's exact cause of death has not yet been declared, it was likely electric shock drowning, which can cause paralysis and, subsequently, death for swimmers.

Last year, an Alabama family suffered a similar incident, as well as a family in New Jersey just yesterday.

The Johnsons of Alabama have since publicly emphasized the importance of water safety involving electricity; prior to their 15-year-old daughter's death, they were not aware that docks could carry electric currents and have such serious consequences for those who enter the water.

The Electric Shock Drowning Association calls the issue a "silent killer" and, in their list of ways to prevent it from happening, notes that people should never enter the water surrounding marinas, docks or boatyards, and encourages boat owners to have their vessels inspected by electricians.