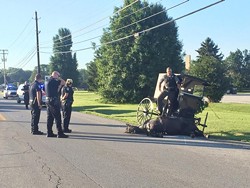 Courtesy of Wooster Police Department
Every Ohioan knows to watch for deer while driving, but what about an escaped horse and buggy?

State Highway Patrol Sergeant C. Otis Smith and his officers had to deal with that exact situation yesterday in Wayne County, after being made aware that a riderless, buggy-pulling horse was galloping westbound down U.S. Route 250, in the wrong lane.

Before the horse could make its way further down the highway and cause a serious traffic accident, Smith took action.

“You have that second when it goes by you and you grab hold [of the buggy] and jump on,” Smith told the Akron Beacon Journal today. “I had to be quick.”

Smith made it safely onto the buggy and promptly stopped the horse by taking hold of its reins. After slowing from 20 to 25 mph, the animal settled onto the ground (see below).

A veterinarian confirmed that all is well with the horse, though it is, in Smith's words, "exhausted." The animal has since been returned to its owner.

“I’m just glad it turned out okay,” Smith told the Wooster Daily Record. “That could have been a bigger incident with a 2,000-pound animal running in the wrong lane.”