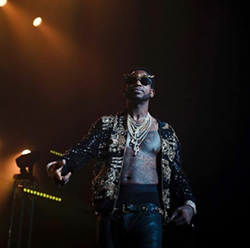 The Cleveland rapper and actor, who recently scored the position of Reebok's Global Ambassador, has now landed hip-hop star Gucci Mane for his EST Fest.

EST Fest IV is currently set to place in Butler, Ohio this summer from Aug. 11 to 13. Naturally, Machine Gun Kelly is headlining his own event, the theme of which is "1970 Somethin'."

Atlanta-based Gucci Mane was released from prison last year, and has since cranked out several popular albums. Other artists joining him at the event will likely be announced soon.

While the event has stirred some controversy in the past, this year's iteration promises "two days of incredible live music, food, vendors, art, late night parties, swimming, camping and unparalleled energy." Tickets are priced from $99 to $250.