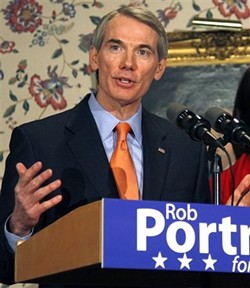 photo via Scene archives
Sixteen protestors were arrested outside Senator Rob Portman's Columbus office on Friday, after a sit-in demonstration lasting more than a day escalated.

The group, which included members from a disability rights organization (ADAPT), was protesting the current GOP health care bill.

The protest grew heated when activists blocked access to the building's elevators for medics responding to a call. They called the medical emergency a 'ruse,' and shortly after were physically removed by police officers.

Around 30 protesters also occupied the Scripps Center Thursday in Cincinnati, the home of Portman's regional office. Ten of these protesters spent the night in the upper-level office, and left Friday afternoon. This 22-hour demonstration ended without any arrests.

Meanwhile, Senator Portman was in Dayton visiting with families affected by the opioid crisis.