'The Nation' Calls Out Dan Gilbert and the Q Deal 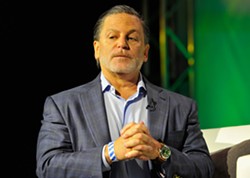 Wikipedia
You can flip through the Scene archives and catch up on Sam Allard's reporting on the Quicken Loans Arena renovations funding deal — and you should — but do also check out The Nation's latest Edge of Sports dispatch, which blasts the corporate welfare sustaining the Cavs' owner.

From the cheerleader-stacked public meetings to the referendum petition signatures, the Q Deal has been a battle of wills from the start.
﻿
"Make no mistake about what is happening here," Dave Zirin writes in The Nation's piece. "This is stadium construction as substitute for anything resembling an urban policy for the people of Cleveland. It is an act of corporate welfare, where public money magically becomes private profit for Dan Gilbert."

While the article does stoop to name-calling, describing Gilbert as "arrogant" and "petty," the national media outlet has no problem roasting the billionaire on the facts, ﻿ like how "the money will be partially paid back with funds generated not from regular-season revenue but from playoff revenues to be earned until 2023."

In The Nation's assessment, the Q Deal is "the politics of predatory lending—slumlord politics—bereft of democracy or morality."