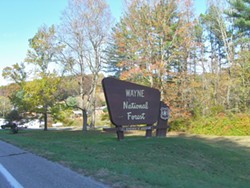 NICK JUHASZ
Starting last December, the federal Bureau of Land Management began auctioning land rights within Wayne National Forest, in southeast Ohio. The catch? The bidders could only be oil and natural gas drillers — private companies that will use the forest for non-renewable energy production.

It wasn't a one-off thing. Auctions continued into 2017, with the next one slated for Sept. 21. The BLM will sell rights to 141 acres.

We traveled to Athens in January to get a sense of what this means for the region and for the state. For one thing, it meant more earthquakes. A 3.0-magnitude earthquake struck the forest in April, and the government ordered fracking operations halt immediately. (The state is still investigating the quake.) Elsewhere, the drilling process has destroyed wildlife habitat, and the bureaucratic process itself has eroded public trust.

A major part of the protest deals with the supply-and-demand cycle that the state of Ohio is accelerating: with more drilling comes more infrastructure, and with more infrastructure comes more drilling. The groups point to the Rover pipeline, traversing Ohio into Michigan and Canada, as an example of how this acceleration can easily go wrong. Rover, which began construction only in March, has spilled millions of gallons of drilling fluid in northern Ohio wetlands. (The Ohio EPA has reported that such fluid "can affect water chemistry and potentially suffocate wildlife, fish and microinvertebrates.”)

"Some parts of the Pipeline pass within one mile of two out of three of the nominated September parcels," the groups write in protest, "and within two miles of the remaining parcel. It seems highly likely that pipelines from lease parcels in the Wayne will feed into the Rover Pipeline."

The groups point out that the cumulative effect of Wayne National Forest drilling and the Rover pipeline construction was not considered in the BLM's environmental assessment.

“We’re protesting this dangerous fracking plan because drinking water safety and public lands should come before corporate profits,” said Taylor McKinnon with the Center for Biological Diversity. “The Ohio and Little Muskingum rivers provide precious water to millions of people in Ohio and downstream states. Pollution from fracking and faulty pipelines would be disastrous for the people who depend on this water.”