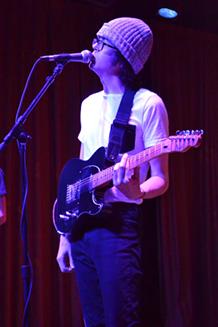 If patrons in the audience at the Car Seat Headrest show that took place last night at the Beachland Ballroom attended without prior knowledge of the band or its sound, they might have left pleasantly surprised, if not somewhat puzzled, by what they had witnessed.

For roughly an hour and a half, the quartet’s mastermind, Will Toledo, and his backing band played to a sold-out crowd that hollered with enthusiasm from the start. Toledo, meanwhile, seemed distant throughout the show in spite of his engaging singing and guitar playing, often casting his gaze down to the stage while holding an expression of indifference that rarely broke into a smile.

Although his behavior could probably be attributed to the “elemental shyness” he has described himself with in interviews, the discordant attitudes between the band and crowd created a somewhat awkward atmosphere in the ballroom, which Toledo noted, in one of few moments of crowd interaction, was “a great venue” as compared to the Rock & Roll Hall of Fame, where the band played the last time it was in Cleveland last September.

Despite the standoffishness, the band’s unique selection of songs and playing was tight enough to buoy the performance. Opening with “Cosmic Hero,” one of many songs played that appears on the band’s latest album, Teens of Denial, the group fired through its set at a rapid pace, often leaving just enough room for a few breaths between songs. Sprinkled throughout the show were unconventional covers, such as “I Don’t Mind” by James Brown, as well as songs from the band’s deep, 12-album catalogue, most of which were written and self-released by Toledo when he was in college.

Songs such as “Vincent” showcased the depth that was added to the band’s sound once it was fleshed out with a full supporting cast. The unrelenting bassline that drives the track was expertly performed by Seth Dalby, as Andrew Katz carried a quick beat and Ethan Ives infused a funky, distorted grit on guitar. One can tell Toledo’s music is constructed with care, which was amplified by the raw power of his singing, even as that passion is somewhat betrayed by his stage presence.

Many in the Millennial and up crowd sang along to an understated rendition of the band’s biggest hit, “Drunk Drivers/Kill Whales” as the band neared the end of its performance. Calls for encore were short-lived, as the group returned to the stage one-by-one to slowly build-up another of its most popular tunes, “(Joe Gets Kicked Out of School For Using) Drugs With Friends (But Says This Isn’t a Problem),” in the first of a two-song encore that seemed to leave the capacity crowd satisfied.

Gold Connections, a quartet from Charlottesville, Va., opened the show. Given that the band’s pioneer, Will Marsh, was briefly a member of Car Seat Headrest and worked with Toledo when producing Gold Connections’ self-titled debut EP, it is unsurprising how similar the band sounded to the night’s headliner. Songs such as “Isabel” showcased a polished indie rock sound that had the crowd moving and in the mood for Toledo and Co.