NBBJ
Architect's rendering of the nuCLEus project.
The next major private-public deal to confront the residents of Cleveland arrives in the form of nuCLEus, the so-called "catalytic event" disguised as a 54-story mixed-use downtown project next to Quicken Loans Arena. Stark Enterprises, the developer, first won approval for the idea in 2014; now, the group is trying to figure out how to pay for it.

The Cleveland Metropolitan School District has been asked to waive 30 years of commercial property tax from nuCLEus in return for an up-front lump sum of $18 million. The pitch is that nuCLEus needs this sort of creative financing relief model to pay for its $542-million building. CMSD has been hosting community meetings for the past week or so to explain the proposal and suss out public opinion. Last night, Scene went along for the ride.

"We weren't looking for this," CMSD CEO Eric Gordon said in a gleaming New Tech West classroom, describing the proposal before his board. "Believe me, none of us were looking for this. ... But we have to act." By "act," he meant "vote," which the board will do later this month.

Here's the proposal: Robert Stark of Stark Enterprises is essentially asking the district and the city to invest in his project, which costs $542 million and will to some degree alter the city's skyline and character. nuCLEus and all of its retail and residential offerings will have a market value of $250 million, according to county estimates, when it opens in 2021. The tax-increment financing model (TIF) would ostensibly fill the gap by allowing the next 30 years of property tax payments to go right back into Stark's construction and development debt. Those tax payments would otherwise go to the school district (about 63 percent) and the city (about 37 percent).

On face value, according to the board, it's a non-starter. 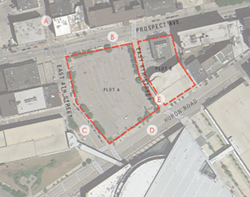 Cleveland Planning Commission
The nuCLEus site is presently an open parking lot located between Prospect and Huron, across from Quicken Loans Arena.
Right now, the district collects about $360,000 each year from taxes paid on the parking lot land where nuCLEus will be built. (Stark already owns the parking lot.) That won't change. What we're talking about here is an estimated additional $4.2 million each year in commercial property tax from nuCLEus and its future tenants. That would be $121 million across 30 years.

The deal proposes an $18 million lump sum in place of that $121 million for CMSD. Stark acceded to what Gordon described as district pressure with that immediate payout offer in 2018 (it's not like that was how Stark began the negotiations). Furthermore, Stark agreed to split 50-50 the taxes on all additional value if in fact nuCLEus' market value increases beyond the anticipated $250 million.

It's worth noting here that the nuCLEus deal has no direct impact on property owners' taxes. But, Gordon was quick to point out, foregoing the tax payments that the district would otherwise receive from nuCLEus may put the board in a position to have to ask for a tax increase at some unknown point in the future. (Issue 108, the district's 15-mill levy, expires in 2020. A tax renewal request is almost a certainty; a tax increase request isn't hard to imagine down the line.)

The whole question here is one of risk: Is it worth it?

The $18 million is only even being considered because it could be used in the district's capital improvement fund for future building construction (as opposed to a general fund, where "it's gone nearly as quickly as you get it," Gordon said).

As we're all well aware, the district is deep into a multi-year construction frenzy funded through unprecedented property tax increases — all approved by voters. The $18 million would be a drop in the bucket (a new high school costs about $45 million), but Gordon pointed out that many construction projects are subject to funding matches at the state level. $18 million could, in theory, triple to $56 million in construction funds, as long as the state approves the project.

Again, Gordon reminded the room, that's a potential $56 million now (maybe a few new westside elementary schools or an eastside Max Hayes) vs. a guaranteed $121 million spread across 30 years. The question again: Is it worth it?

"It's not a slam-dunk deal by any stretch of the imagination," Gordon said last night.

Gordon broke down the fairly complicated and unusual deal very clearly in his presentation last night. (See video of a separate but similar presentation below. The related PowerPoint is here.)


But the numbers are only one part of this story. As Councilwoman Dona Brady (in whose ward New Tech West resides) and other residents pointed out last night, this proposal comes at a time when the public is finding itself and its tax dollars buried under the weight of private interests bent on changing the narrative of Cleveland and revitalizing a once-stagnant downtown.

Most tenants haven't been overtly confirmed, but Gordon intimated last night that several so-called "anchor tenants" will be businesses that are already located downtown — moving into nuCLEus and leaving another storefront vacant. (The "central business district" has a 16.5-percent vacancy rate currently.) The worry among residents last night was that nuCLEus could perpetuate the boom-and-bust cycle of Cleveland commercial hubs: The Arcade, the Galleria, the Flats (only to return again, different), the Warehouse District, East Fourth Street, all have been subject to the whims and fancy of high-profile developers and the shifting sands of an anxious business class in Cleveland.

What are the long-term consequences of greenlighting a project like nuCLEus? With little time to act, those grand questions are left to be sussed out in small community meetings at CMSD. Stark's proposal has teed up a debate over the future of Cleveland.

One resident last night raised the question of precedent: Were the district or the city to approve this deal, could the schools be seen as a TIF ATM for future game-changing projects like nuCLEus? (Cleveland has never seen a real estate project seek financing through the district like this.)

It's a conversation that's going to have to happen relatively fast — not unlike the ongoing Q deal debate and litigation.

The school board will meet Aug. 8 to discuss the plan, and it's expected to vote on Aug. 22.

Meanwhile, legislation relating to this deal is expected to be introduced to City Council on Aug. 16. It's impossible to say when council will ultimately vote, and residents wondered aloud last night whether it would be before or after the election. (It might take a while. "Council has not had a formal briefing on this," Brady said last night.)

City Council holds the final say in this matter, according to state law, which places CMSD in a bit of a Punnett square bind.

If the district and the city both agree, then the TIF deal is on and the $18 million is secured.

If the district and the city both reject the plan, then the whole thing is off and Stark finds a new financing plan.

If the district agrees and the city rejects the plan, then the whole thing is off and Stark finds a new financing plan.

If the district rejects the plan and the city agrees, there is no requirement that Stark must hold up the $18-million pay-out deal. The city could theoretically negotiate something on behalf of the district, but at that point CMSD is left hanging on a limb and in a position to lose everything in this deal. (One resident last night compared the quandary to playing a game of poker with the district's hand facing everyone else at the table.)

CMSD will host additional meetings on the nuCLEus proposal at noon on Aug. 5 at Patrick Henry School and at 2 p.m. on Aug. 6 at Boys and Girls Club, 6114 Broadway Ave.