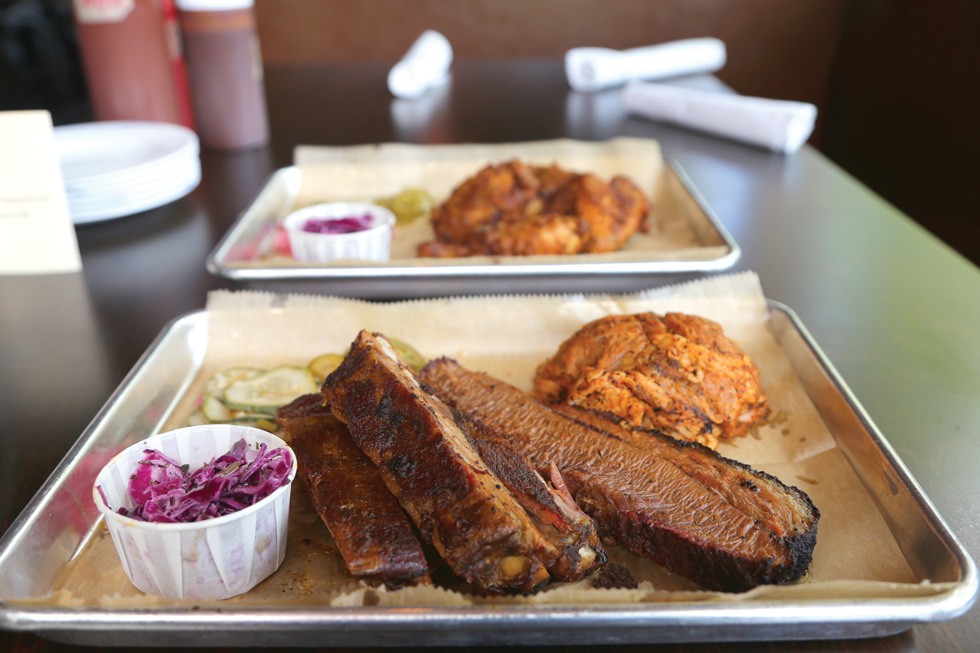 When you catch yourself dissecting, both literally and figuratively, various cuts of meat with your tablemates, as I did one evening at Smokin' Q's in Mayfield, the battle already has been lost. I've been so completely immersed in the act of enjoying barbecue — essentially a smoke-induced flow state — that I've lost all track of time, "coming to" only after the very last bone has been sucked clean. But that wasn't our experience during a pair of recent visits to this new suburban smoke shack, where we picked at our ribs, brisket and beef short ribs in an attempt to determine what went wrong.

There are myriad ways that barbecue can go south, especially in a busy commercial setting. It's unrealistic to expect a beef brisket that requires 16 hours of meticulous attention to be pulled from the smoker and sliced the moment you place your order. As various cuts of meat come out of the pit they are wrapped and held for service in a juggling act of timing, technique, technology and even a bit of luck, as crowds are always impossible to predict. What comes after the meat is pulled is exponentially more challenging to master than what comes before.

"That is definitely always a challenge, depending on the cuts and what it is, but I've been pretty happy with the results," says chef Zachary Ladner on a followup call.

Ladner is a Texas transplant, who for the past seven years has been Carl Quagliata's right-hand man at Giovanni's Ristorante in Beachwood. The pair made news a little over a year ago when they announced that they'd be opening a barbecue restaurant in the former home of Fisher's Tavern in Mayfield, which had closed after more than 80 years in business.

In terms of food, Smokin' Q's goes well beyond typical rib shack fare. In addition to the barbecue, which itself is extensive, the menu offers 10 starters, nearly a dozen sides, and main courses that veer off into the territories of burgers, tacos, fried chicken and even a chicken-fried ribeye. That broad inventory might have something to do with the bland, chewy brisket, dry and spiky spare ribs and improperly "re-thermed" beef plate short ribs that arrived cold in the center and then unnaturally hot after being reheated in the kitchen.

Smoked meats are purchased by the half-pound, with prices as follows: brisket ($12), pulled pork ($11), spare ribs ($8) and beef short ribs ($25 per order). Three different well-stocked combo platters are a great choice for folks who want to sample two, three or four types of meats in a single meal. Ladner doesn't skimp on quality, sourcing heritage breed meats from small local and regional farms. Diners have a choice between Traditional Style, served with rolls, slaw and pickles, or El Jefe Style, which swaps the rolls for housemade corn-flour tortillas and the sauces for salsa and guac. We found the tortillas to be a little stiff and brittle.

But there's so much more to Smokin' Q's than its smoked-meat platters. Start with an order of BBQ Brisket Poutine ($12) and you'll enjoy a hot skillet filled with french fries, gravy, melted cheese, cheese curds and tender chunks of beef brisket. Pulled pork is used to great effect in the BBQ Pork Nachos ($12), a multilayered affair with chips, cheese, chili, black beans and pickled peppers. Also enjoyable and eminently sharable is the Quesomole ($11), a unique marriage of melty queso and guacamole that is enjoyed on crispy chips with a trio of salsas.

Fried chicken ($15), a recent addition to the roster, also is an unmitigated winner. The four-piece buttermilk-brined Amish chicken is lightly breaded and nicely seasoned in a way that accentuates the skin while protecting the white and dark meat. Entrees like the chicken, or a fried and smothered pork cutlet ($16), include rolls, slaw and a choice of sides. Smokin' Q's cast-iron cornbread is pitch-perfect, an airy souffle studded with corn and gilded with a fat dollop of whipped butter. The restaurant's baked beans are a far cry from the typically drab smokehouse fodder, with firm beans and tender shredded meat in a thick, smoky gravy.

I still haven't figured out why a draft pint of Market Garden beer is $9 while two fingers of Bulleit Bourbon is only $10, but it'll be brown booze for me when I return. And when I do, I'm certain that I will be joined by a bar, dining room and patio (weather permitting) full of diners, just as I was on two separate mid-week visits. It seems that my obsessive-compulsive practice of barbecue vivisection is a character flaw not shared by many others.

If there's any doubt that Ladner and boss Quagliata will get the hang of this multifaceted Hydra of an operation, take a gander at Giovanni's, which just sprinted past the 40-year mark and shows no signs of easing up.