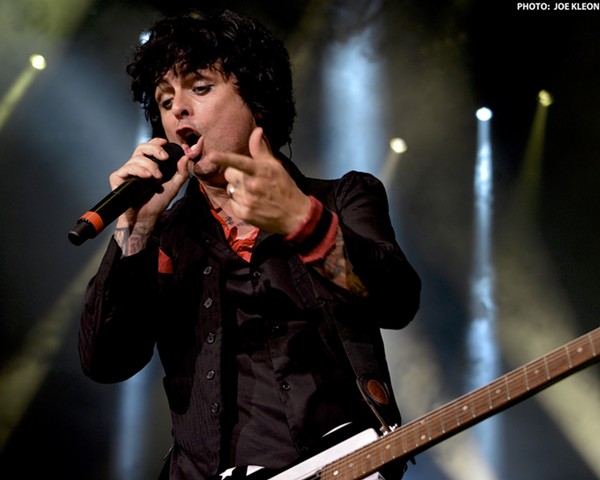 Joe Kleon
When seeing a Green Day concert in 2017, one might assume pop-punk’s elder statesmen, whose founding members, Billie Joe Armstrong and Mike Dirnt, formed the band just over three decades ago, have lost a step when it comes to putting on a show.

That assumption proves to be far from the truth, as many who witnessed the enthralling, two-and-a-half-hour set the group performed to a maxed-out crowd at Blossom Music Center last night would likely attest.

Nearing the last stretch of a lengthy world tour that began in Columbus just under a year ago, the band played in support of its latest album, 2016’s Revolution Radio. Even so, fans young and old – including a surprising number of youngsters who looked to have not yet been born when Green Day dominated the airwaves with “American Idiot” during the George W. Bush era – were treated to a set that spanned the group’s long history and deep collection of hits.

At this point in its career and of the tour, the trio, completed by enigmatic drummer Tré Cool, has cracked the code to putting on a tight, well-crafted set. Opening with stadium-rock anthem “Know Your Enemy,” Armstrong immediately acted as the piston that drives the band’s high-energy act, pacing the stage between verses and provoking the crowd to yell along to the song’s heavy hook.

In keeping with the tradition the band has adopted in recent years of getting the crowd immediately involved in the show, the front man plucked an adolescent, pink-haired punk fan from the crowd to sing along to the chorus and stage-dive back to her spot on the floor. She would ultimately be the first of three fans to join the band to help perform a song.

For the most part, the group stuck to its guns as it blazed through a collection that included hits new (Revolution Radio’s “Bang Bang”) and old (“2000 Light Years Away,” originally written when Armstrong and Dirnt were strung-out teens playing seedy clubs in California). Of course, many of the hits from the band’s major-label debut, Dookie, made up much of the mix; “Basket Case” and “Welcome to Paradise,” both reserved for the heart of the set, were largely carried by voices from the crowd.

What was most impressive about the band’s performance was the sheer energy of it all. Armstrong never stopped moving across the stage, whether he strutted, danced, ran or crawled across its floor. Dirnt sneered and made faces at individual members of the crowd throughout the show, as Cool kept a steady beat, occasionally stealing the spotlight to solo between songs.

Overall, the atmosphere of the show was positive, with Armstrong preaching love and unity among those in attendance while frequently stating his love for Cleveland and Akron – in addition to trashing Pittsburgh when a fan held up a Steelers' jersey. But despite saying that everyone could check politics at the door, there were moments when he couldn’t help himself from venting. During the performance of “Holiday,” a song from the band’s politically-charged album American Idiot, he encouraged the crowd to yell “no racism, no homophobia and fuck Donald Trump” along with him. At another point, while lamenting the recent protests in Charlottesville, Va., he landed the zinger, “I’m a pacifist, but if I see a Nazi, I’ll pass a fist right upside his fucking head.”

The production behind the band kept things interesting, if not blinding. People who had spent too much time staring at that afternoon’s solar eclipse without eye protection would find no rest for their burnt-up retinas at this concert, as lights lined just about every inch of the stage and strobes flickered from above throughout the show. Blasts of fire and explosions were timed to hit with the last note of a song, often as Armstrong stuck a landing after leaping from an amplifier at the front of the stage.

The sweat and spit that visibly dripped from the front man from the third song in practically pooled by the time he concluded the show with a solo rendition of the band’s acoustic hit “Good Riddance.” Looking tired, yet overjoyed, as they embraced at the front of the stage to dismiss the crowd, Green Day seem like a band that might try to play as long as they live.

Prior to the start of the headlining set, Catfish and the Bottlemen performed a tight half-hour set of alternative rock that included some hits the band has become known for in its ten-year career. Opening with its most recognizable hit, “Kathleen,” the quartet showed what has made it an award-winning group in Britain, though its presentation paled in comparison to what was to come from the headliner.