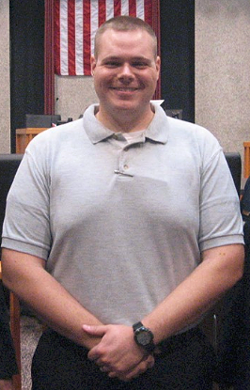 We were told that this was a distinct possibility after a rally was held at the Euclid Municipal Building Monday night, when protesters from Black Lives Matter Cleveland joined the Stewart family in pleading with Mayor Kirsten Gail for answers.

Gail offered a solemn response and said that the state's Bureau of Criminal Investigation has completed its review of the Stewart case; it's out of the city's hands at this point. The case will be sent to the Cuyahoga County Prosecutor's office for an impending grand jury hearing.

WKYC first reported on Rhodes' move in a news story that also includes — for the first time in local media — a brief, expository report from the video of the March 13 shooting. ("At one point, officers on scene could be heard suggesting they not use their radios," according to the news station.)

The Stewart family was scheduled to meet with city leaders on Thursday, including Police Chief Scott Meyer. Scene learned last night that the meeting had been canceled; it's unclear if or when the parties will meet in the future.

When we last spoke with the Stewart family, they were calling for a meeting within 48 hours of the Monday night City Council meeting. They have been waiting for that meeting since March.