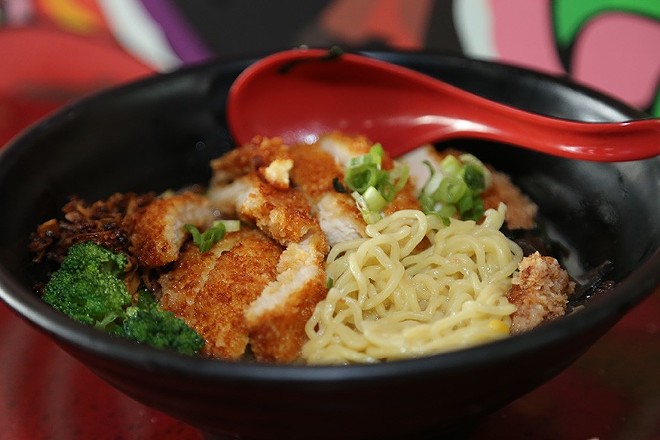 Emanuel Wallace
Well, it didn't take long to find out what would be replacing Noodlecat on Euclid Ave. Just two weeks after Jonathon Sawyer announced the downtown location's closure there is good news for both downtown diners and ramen fans as Otani Noodle, which has operated a slurp shop in Uptown for just over a year now, is set to take over the address.

There aren't too many details in the Facebook announcement except that it's all coming soon and it will be a second location for Otani, not a relocation of its original restaurant. If you haven't yet enjoyed Otani's fast-casual ramen, you're in for something delicious. Here's a snippet from our review last July:

The slim slurp shop, which opened in June, is elegant in its simplicity. In place of the now-ubiquitous quick-serve process that finds diners faced with countless choices and infinite permutations, Otani proffers a perfect 10-item roster.

The straightforward pictorial menu consists exclusively of predesigned bowls numbered one through 10. The most prevalent broth here is tonkotsu, a rich and opaque brew made from long-simmered pork bones. It's the star of roughly half the choices. Rounding out the broths are miso, made from fermented bean paste, shoyu, a soy-based broth, and the odd man out, tom yum goong, the popular Thai hot and sour soup.

Most bowls come with bouncy ramen noodles, which have the consistency of al dente egg noodles. Since they continue to cook in the hot broth, the quicker you eat them, the better they are. The tom yum goong swaps the ramen for rice noodles, and one of the shoyu bowls contains udon.

Each bowl is topped with a different main event, from sliced char siu roast pork or simmered pork belly to crispy tempura-fried shrimp or thin and crisp chicken or pork cutlets, which are fried to order, sliced and laid on top of the soups. Most also contain a soy-marinated soft (though closer to hard) boiled egg, scallions, seaweed, veggies and mushrooms.

Guests order and pay at the open kitchen, grab a seat at one of the communal high tops, and wait until their name is called. When it's not too busy, staffers often bring the food to you. Prices range from $7.95 to $11.95 per bowl.