Paul Dolan Says Team Still Not In Total Agreement With MLB on Wahoo Changes, But Changes Coming Before Next Season 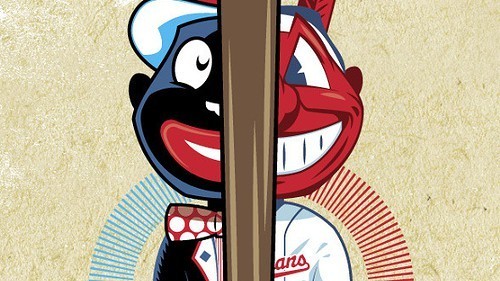 The now accelerated (since last season's ALCS against Toronto and all the negative, nationwide attention Wahoo drew during that series) and long overdue process of ridding Chief Wahoo from the official identity of the Cleveland Indians looks like it will reach its end point before the 2018 season and maybe sooner, according to Paul Dolan.

Talking to group at 1590 WAKR’s speaker series in Fairlawn yesterday, the Tribe owner acknowledged that the team and MLB haven't exactly reached a middle ground on transitioning away from the racist red sambo. MLB Commissioner Rob Manfred has made his feelings clear since the offseason as he took increasingly more public stances on his/MLB's desire for the Tribe to finally do something. Discussions have been ongoing, both parties have said at various times during the season, but Dolan indicated yesterday that while no agreement has been reached yet, it probably will be by Opening Day next year.

“We’re not exactly aligned on its future,” Dolan said. “But we will come to some understanding some time relatively soon."

Plenty have piled on the angle that the Indians are fighting tooth and nail for the preservation of the hideous and offensive logo, and by all accounts they have been, but as Craig Calcaterra points out at NBC, a more plausible scenario is that we're seeing a good-cop bad-cop routine played out for the benefit of Cleveland's Keep the Chief sect. Indeed, we've heard from sources that the team would play it exactly this way with its fanbase: Listen guys, we'd love to keep it but Top Men at Major League Baseball are making us get rid of it. It'd be a smart PR strategy, for sure.

Also worth pointing out are Dolan's comments yesterday that gave more than a head nod toward the real racism at play with Wahoo and Cleveland's willful bubble mentality and blinders when it comes to our ability to see it.


Here's more of what Paul Dolan said today regarding Chief Wahoo, talks with the league, perceptions of the logo pic.twitter.com/6Vh4LElYbZ