Everyone's in love with A.F.I., the bleak punks with the promising future. 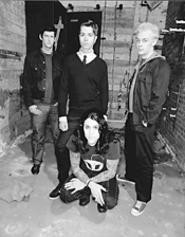 Because heavily tattooed rocker types don't normally sing about flowers, falling stars, and antique wedding dresses, A.F.I. is the most emboldened band to hit the punk scene in quite a while.

"We're not a punk band, and we don't consider ourselves a punk band," clarifies A.F.I. guitarist Jade Puget from his home in California. "When I first started listening to punk, it was a narrowly defined style of music -- it was obvious what was punk and what wasn't. But now people slap that label on anything that comes along, so it's not something that we even worry about."

These days, A.F.I. (short for A Fire Inside) doesn't seem to worry about much at all. The band's as hot as its namesake: Its sixth full-length album (first for a major label), Sing the Sorrow, debuted in mid-March at No. 5 on the Billboard Top 200, selling almost 100,000 copies in its first week. (The disc's first single, the soaring, sorrowful "Girl's Not Grey," has been a radio staple for months.) A.F.I. is the "Cool Band" in Rolling Stone's current "Cool Issue," and its latest tour sold out well in advance in most cities (a few tickets remain for the April 15 Agora gig). After this round of dates, the band will headline the Warped Tour, the annual punk-rock endurance test,where bands like A.F.I. -- with its leather pants, eyeliner, and Lost Boys look -- are becoming an anomaly.

A.F.I's unorthodox appeal begins with frontman Davey Havok, a ringer for the vampire Lestat, whose already ambiguous sexuality is further muddled by his pronouncement, "It's time for me to be a girl!" (on the song "Rolling Balls," from A.F.I.'s 1996 debut, Very Proud of Ya). Entertainment Weekly likened his high-pitched yelp to a "squirrel trying to imitate Geddy Lee." Blanketed in cello and synth, with drum & bass underpinnings and doomsday lyrics that are all Edgar Allan Poe in combat boots, A.F.I.'s sound congeals into dusky goth punk that's more about self-flagellation than slam dancing.

And that is a long way from A.F.I.'s origins as a straightforward hardcore band from rural Ukiah, California. Before they were singing about chrysanthemums and dancing in the rain, they wrote songs like "I Wanna Mohawk (But My Mom Won't Let Me Get One)" and "Cereal Wars," a breakfast barnburner with lines like "I'll try some Coco Puffs today/What the fuck is Sonny anyway?" The turning point for A.F.I. came in late 1997, when Puget replaced guitarist Markus Stopholese. An old-school punk who grew up on Minor Threat, the Germs, and Black Flag, Puget also followed dark art, electronica, and orchestral music.

"My mom has a concert grand, she composes music and plays classical, and so I grew up listening to a lot of classical and being around that kind of music," he explains. "My first love, as far as guitar playing [is concerned], was the blues. I was a punk at the time, but when it came to guitar playing, I was all about Robert Johnson, Muddy Waters, and B.B. King."

Puget's influences were all over A.F.I.'s 1999 opus Black Sails in the Sunset, a pivotal album for the band that blended galloping guitars and adrenal choruses with touches of melancholy atmosphere, black prose, and song titles like "Porphyria Cutanea Tarda." Art of Drowning, the band's 2000 album, went a step further into the shadows, where Sing the Sorrow firmly resides.

An album that manages to be both bleak and anthemic, Sing the Sorrow might be punk's first "headphones record." With a choir, spoken-word passages, and an ominous intro that sounds like the theme from The Terminator, it's one of the more expansive records of its kind. There are breathy ballads like "The Leaving Song" (think "Dust in the Wind" with black lip gloss), full-on punk anthems with rubber-laying solos ("Dancing Through Sunday"), and string-laden rave-ups that sound like an Offspring duet with the London Philharmonic ("Death of Seasons"). Co-produced by Jerry Finn (Blink-182, Rancid) and alt-rock maestro Butch Vig, the album is lush and immediate, like the Misfits in velvet. It's a shape-shifting disc, whose only constant is an overarching sense of dread.

"As far as we're concerned, we haven't found much to be hopeful about, as far as popular mainstream music goes," Puget says, before brightening slightly. "It has been kind of nice, over the last year or so, to see these bands like Queens of the Stone Age, Interpol, and Fischerspooner, who don't fit into any of these pre-established genres, getting radio play and getting on MTV."

Indeed, it's bands such as these, along with Tool and Nine Inch Nails, that A.F.I. considers its contemporaries, as opposed to Green Day, maybe, or Blink-182. And A.F.I.'s audience -- which the band calls its "Despair Faction," a mix of metalheads, hardcore hooligans, and Hot Topic goths -- reflects those wide-ranging tastes. The Faction's loyalty is remarkable: It's common practice for fans to get tattoos of A.F.I.'s logo or album imagery (the liner notes to Sing the Sorrow even list the band's favorite tattoo parlors). The message board at A.F.I.'s website (www.afireinside.net) features scads of testimonials: how the band's music helped me through tough times, how A.F.I. saved my life, etc. This for a band that's bent on despair.

"If we were playing happy music, it could be just as popular -- but happiness is more fleeting," Puget says. "If you listen to a happy, poppy song, you might be able to get into it quicker, but the effect is going to be really transient, whereas with a really deeply moving, emotional, sad song . . .," he says, then pauses. "That can stay with you forever."