A Hitch in Thyme

Fine food meets foul service on the square in Medina. 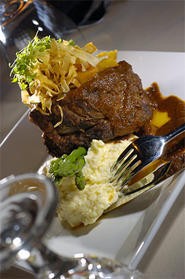 Walter Novak
Short ribs at Thyme: It's comfort food for cool palates.
Strange times call for novel strategies. We're referring to the strangeness of inept servers and the strategic depths to which we've sunk in our growing frustration.

Consider a recent experience at Thyme, John and Kathy Kolar's new, contemporary hot spot in Medina. To make a long story short, our waiter pretty much ignored us -- other than a valiant attempt to "up-sell" us on one of the moderately priced wine list's most expensive bottles. But otherwise, he typically made himself scarce. He didn't bother to tell us the evening's specials. He routinely forgot to bring flatware. And he didn't refill our water glasses, even after we flagged him down and begged.

Oh sure, he said he would be right back. But instead, we observed him wandering around near the kitchen door for a good five minutes, apparently waiting for an order to come up. When he finally ventured within hailing distance, we repeated our plea for more water. "Just a minute!" he snapped, with true condescension.

When he ultimately showed up with the pitcher, we couldn't resist mentioning the delay. "Oh, I got distracted," he sheepishly admitted. Then, to his credit, he noticed we didn't have forks for our just-arrived entrées. "I'll be back in 30 seconds!" he vowed. And so, in a state somewhere between amusement and frustration, we began to count out loud. "One Mississippi, two Mississippi . . ."

"How'd I do?" he asked when he returned with the forks.

"Seventeen seconds. Not bad. Now, could we have some salt -- say, within a minute?"

"One Mississippi . . ." we started counting, and suddenly it must have clicked; off he zoomed, and our salt and pepper appeared before we'd even reached the forties.

This, I realize, well may mark the nadir of my professional career: "timing" the waitstaff in an attempt to shake some service out of them. I seem to recall using the same technique to motivate my toddlers; who knew it would prove to be the key to lighting a fire beneath a Medina waiter?

It's a shame, really, because oddball servers aside, there is much to love about Thyme, not the least of which is John Kolar's food, a mostly delightful amalgam of quality ingredients and sassy seasonings, assembled in ways that are often novel and occasionally downright inspired.

While lots of chefs promise "comfort food with a twist," this Culinary Institute of America grad and former executive chef at Lakewood's Three Birds actually delivers. Take his short rib entrée, for instance, its classic homeyness torqued with a tongue-tingling tartness, thanks to a sweetly sharp pickled papaya garnish and a heady tomato-tamarind sauce, as fiercely complex as a fine Mexican mole.

Among starters, an ample lobster quesadilla took the same sort of unexpectedly global turn, melding the pungency of melted brie, the burn of roasted poblanos, the sweetness of caramelized onion, and the sea-salty enchantment of fresh, poached lobster, against a sparkling mango salsa and a dab of tarragon crème fraîche.

Even the space -- the former Sarafina's, and originally a Red Barn -- serves up tasty torsion, with more than a soupçon of irony. Do you supposed anyone standing in line for a Barn Buster back in the '70s ever suspected that, someday, well-dressed suburbanites would be dining on prosciutto, pear, and gorgonzola flatbread, at tables draped in tan and black linens, beneath the high ceiling's signature beams?

Meals begin with a gracious amuse bouche -- a complimentary "kiss from the chef" that during our visits consisted of a sip or two of warm apple-parsnip bisque, served in a handsome cordial glass. The breadbasket is also a delight, filled with thick slices of coarse, crusty French bread from L.A.'s La Brea Bakery and slabs of homemade herbed focaccia; on the side, fat butterballs, piqued with thyme and honey, add a slather of sheer luxe. And after dinner, freshly brewed espresso, cappuccino, or French-press coffee tastes like a million bucks -- particularly when accompanied by fresh pineapple and berries, tucked beneath an ephemeral zabaglione blanket.

Salads are à la carte, but the seasonal greenery is worth the extra cost. A Caesar comes decked out with a chewy, cheesy tuille and a broad ribbon of crisp prosciutto -- although it would have been swell if the kitchen had pared away the romaine's bitter stem before serving. And an eye-appealing arrangement of prosciutto-wrapped asparagus, draped in a frothy goat-cheese fondue, on a bed of truffle-kissed greens earned high marks for fragrance and flavor. (Most salads and starters are ample enough to share; in another gracious move, the kitchen voluntarily divided our shared courses and plated them separately, at no extra charge.)

Among main events, a trio of shimmering sea scallops, on soft polenta with a balsamic-honey glaze, was a winner. Still, not every dish hit the mark. For instance, a Delmonico steak was unevenly grilled -- medium-rare on the thick end, well done on the thin. More disappointing still was its flavor: flat and dull, and lacking a savory char. Boneless pan-roasted chicken, too, seemed merely to mumble when we had expected a song; and on the side, a bitter bouquet of broccoli rabe was tough enough to double as dental floss.

Fortunately, working through such culinary rough patches shouldn't be a problem for a chef of Kolar's cred. On the other hand, if he wants to tighten up the service, we can offer one word: Stopwatches. It may sound wacky, but it worked for us.