A Polish auteur -- and Mike Tyson! -- stage comebacks at the 2008 Cannes Film Festival. 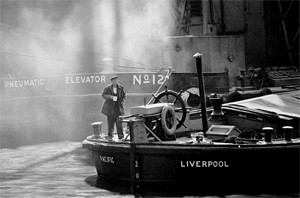 Of Time and the City: The first masterpiece of Cannes 2008.

Call them the comeback kids: In its early days, the 2008 Cannes Film Festival has served as a staging ground for a number of unlikely returns, beginning with that of Polish director Jerzy Skolimowski, who's been absent from movie screens (except as an occasional actor) for nearly as long as Indiana Jones — 17 years, to be exact. In the '60s and '70s, Skolimowski created an international stir with his early directorial efforts Walkover and Barrier, before moving on to a series of highly original English-language films, including 1970's Deep End, which traced the ill-fated romance between a shy teenage boy working in a London bathhouse and the female co-worker he admires, obsessively, from afar.

Shades of Deep End color Skolimowski's latest, Four Nights With Anna, which opened the 40th edition of the festival's Directors' Fortnight sidebar. It's a small but meticulously realized film, inspired by an item Skolimowski came across about an introverted hospital morgue worker (played by the superb Polish stage actor Artur Steranko) who expresses his growing affection for a beautiful nurse by breaking into her apartment while she sleeps and spending four successive nights by her side. That potentially creepy scenario is brought off by Skolimowski with surprising tenderness and perverse humor. (Not soon to be forgotten: the image of a dead cow floating down a river under a bleak midwinter's light.)

Also back in the headlines at Cannes was Mike Tyson, whose appearance as the starring attraction of James Toback's Tyson (which screened in the festival's Un Certain Regard competition) created nearly as much of a stir on the Croisette as if the former heavyweight champion had announced he was stepping back into the ring. Recalling Errol Morris' 2003 Robert McNamara tête-a-tête The Fog of War, Toback's film is less a traditional documentary than it is a kind of document — a feature-length interview with the retired fighter, who, save for some sparingly used fight footage and clips from earlier Tyson documentaries, appears on screen for every one of the movie's 90 minutes. And like Morris, Toback, who has known Tyson for more than 20 years (and who previously cast him in the dramatic features Black and White and When Will I Be Loved), comes neither to lionize or demonize his subject. Instead, he simply gives Tyson a space, far from the madding media crowd, to tell his own story in his own terms, from his troubled childhood on the streets of Brooklyn to his eventual fall from the heights of boxing mythology.

It's a risky proposition that pays off handsomely, thanks in no small measure to Tyson's mesmerizing candor and self-awareness as he contextualizes his entire life in terms of fear, confidence, and intimidation; speaks with remarkable clarity about his psychological process inside the ring; and laments his inability to master the considerably trickier terrain of personal relationships. Nothing is off-limits here: his marriage to Robin Givens, his 1992 rape conviction, the Evander Holyfield ear bite. Rarely are Tyson's comments any more predictable than one of his blindsiding combinations. But Tyson is no less fascinating for the insights into race, class, sexuality, and violence in American life, which remain unspoken, implicit, simmering just beneath the movie's surface.

Perhaps the most welcome or satisfying Cannes comeback is that of British filmmaker Terence Davies (Distant Voices, Still Lives; The Long Day Closes). Davies once told The Guardian that, "Work is my raison d'être, and if that's taken away, you become a nonperson," but he's been unable to secure financing for a new film, following the commercial failure of his masterful 2000 Edith Wharton adaptation, The House of Mirth. So, rather like Skolimowski, Davies went back to basics, securing $500,000 from a consortium of British arts organizations to make a film about his hometown of Liverpool as part of the city's ongoing celebration as Europe's 2008 Capital of Culture. The result, a 75-minute documentary essay titled Of Time and the City, is the one film I've seen thus far in Cannes that I wouldn't hesitate to call a masterpiece.

Assembled from a wealth of Liverpudlian archival footage and stock photos, set to a dauntingly literate soundtrack that blends Davies' lyrical narration with quotations from James Joyce, Friedrich Engels and A.E. Housman, this sometimes sentimental, frequently acerbic, always intensely moving memory film filters the director's own 62-year lifetime through the prism of a changing cityscape. The results reaffirm that Davies is simply more attuned to the radiant and terrible beauty of the world than we mere mortals. And for that we — to say nothing of the people who finance motion pictures — should be most grateful.

This year's competition got off to a shaky start, with Brazilian director Fernando Meirelles' Blindness, based on the novel by Portuguese Nobel Prize-winner José Saramago. Doing little to counteract the conventional wisdom that great books rarely, if ever, make for great movies, Meirelles' adaptation (which was scripted by the Canadian actor-writer Don McKellar, who co-stars alongside Julianne Moore and Mark Ruffalo) takes Saramago's ambiguous cautionary tale about a nameless metropolis stricken by a plague of white blindness and turns it into an overly literal, ham-fisted allegory about man's inhumanity to his fellow man, drenched in the same gratuitous visual "style" (i.e., flashes of white light consume the screen every time a character loses his/her sight) Meirelles brought to the overrated City of God and The Constant Gardener. Things improved significantly with strong new films by three Cannes regulars: Turkish director Nuri Bilge Ceylan (Three Monkeys), China's Jia Zhangke (24 City), and Belgium's Dardenne brothers (Lorna's Silence), a team in the running to become history's first triple Palme d'Or winners (having previously copped the festival's top prize in 1999 and 2005 for Rosetta and L'Enfant, respectively).

Best of all so far is A Christmas Tale, in which Kings and Queen director Arnaud Desplechin takes his career-spanning interest in family and its discontents to (literally) the cellular level. The movie takes place during the chaotic holiday reunion of a sprawling French clan whose matriarch (a regal Catherine Deneuve) has recently been diagnosed with degenerative bone cancer. A marrow transplant is her only hope of survival; children and grandchildren, nieces and nephews are all potential donors. Unlike the frequent Hollywood variations on this story, however, the looming specter of death does not serve as a panacea for the healing of old family wounds. It is, instead, a reason to pick away at old scabs, to dig toward the very DNA of human relations. In the tragicomic universe of this immensely gifted filmmaker, there are no givens: Parents may secretly (or openly) resent their children, siblings may banish one another from the family nest, attempted suicide and institutionalization may pave the way toward reconciliation. Some have already hailed A Christmas Tale as Desplechin's Bergman film, his Fanny and Alexander. But it is also close to Balzac, with whom Desplechin would almost certainly agree that "we exaggerate misfortune and happiness alike. We are never as bad off or as happy as we say we are."