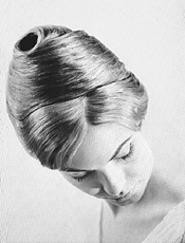 In this era of wash 'n' wear, bedhead is about the closest women get to the crowning coiffure of the early 1960s: the Beehive Hairdo. Thank gahd. Some of those Ionic updos were so "up" that the wearer could sublease them to a family of gnomes.

But though they didn't stand the test of time, the steepled beauties did stand the test of Corvette convertible — a quarter of a can of Set and Spray lacquer, and you were good to go, says Annie Gospich, hairstylist for Sognia's at La Place and veteran pouf procurer. Gospich and three other stylists will be backcombing the bejesus out of volunteers at the Bouffantarama on Sunday at the Mayfield Jewish Community Center, an all-ages bash that includes carnival games, a vintage car show, and music by Nashville party band the Bouffants, whose theme is "The Higher the Hair, the Closer to God."

In 1965, when Gospich was "a little brown-nose" at the Cleveland Academy of Cosmetology, her theme was more like "The Higher the Hair, the Closer to Graduation." Beehive patrons would beat a path to her chair — an updo cost a dollar, plus a ten-cent tip. Not that the women had a choice of stylists — when Gospich's classmates saw the "beehive ladies" coming, they would all take a smoke break in the ladies room or out on the ledge of the building near East 12th Street and Euclid Avenue.

Gospich — who had recently graduated from eighth grade at a Catholic girls' school — was too young to smoke. When she saw the high-hair priestesses, she thought only of the hands-on hours she could log toward her beautician's license. She shrugged off the other girls' hesitations, figuring they were just ne'er-do-wells afraid to tackle something so elaborate.

Later, she found out they were ne'er-do-wells who didn't want to do the hair of the hookers down the street, but by then she had built a clientele. And finally, the proliferation of pillow feathers she'd find when she'd shampoo out their old nests began to make sense.

"Who the hell knows what else was in there," she recalls. "I guess I should have been out smoking."

Actually, a beehive only took about twenty minutes to whip up and lasted about two weeks, with "a little comb-out in between to refresh it," says Gospich. "It seems gross, but years ago, people didn't handle their hair like they do today. When you put all that spray on it, your hair gets so dry," and when it's kept up so high, it's away from all those nasty scalp oils.

Even sleep didn't muss the eighth wonder of the world. If women were especially restless sleepers, they could buy a beehive hairnet, one of mankind's greatest inventions — next to the single-slice toaster — and still available at drugstores and beauty supply shops.

Gospich's recipe for especially high hair: a Styrofoam cup, which is placed in the center of the client's head — the hair gathered into a ponytail and wrapped around it — and upwards of eighty bobby pins. "Sometimes it was comical," she says, noting that her record was just shy of a foot. "But it gave them more height, and it gave them a kind of security."

If Gospich ever entertained any of her own beehive dreams, they were dashed in class demonstrations by a sadistic pedagogue named Mr. Titus, who gave her a headache she won't soon forget.

"He used to take my hair and pull it back in a rubber band so tight that my eyes would look tiny," she says. Mr. Titus would then backcomb the ponytail into a bouffant, which she had to wear around the beauty school all day, her eyes tearing from the pain.

"I got razzed pretty good," she recalls. "To this day, I can't leave things in my hair very long.

"But if I had taken it out, he'd a killed me. He was this really Gestapo-type guy. But I learned a lot from him." So let the primps fall where they may. — Laura Putre