With Fuel. Tuesday, July 17, at Blossom. 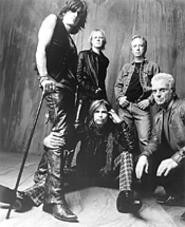 Name a band with less artistic cred than Aerosmith. Go ahead. Try. Sure, our Beantown boys remain quick on the draw with those classic-leaning guitar-pop anthems, and singer Steven Tyler still has more charisma than every "modern" rock frontman put together. But really, really digging Aerosmith requires one to endure a nearly infinite number of cringe-worthy moments. See Aerosmith vamping with Nelly, Britney, and 'N Sync during the Super Bowl. See 'em slummin' with the still-godawful Cheez Whiz ballad "I Don't Want to Miss a Thing." And now, see 'em form a "multifaceted" relationship with Dodge, with whom they've just signed a marketing contract. You can imagine the pitch -- buy a Viper now, and you'll get a free tube of Tyler-endorsed lip gloss in a handy fire extinguisher-sized container. But oddly enough, the very shameless, calculated, and corporate gooniness of Aerosmith makes the band a dynamite live ticket. Tunes off the new album, Just Push Play, should fit in well with what we hope is a bombastic greatest-hits extravaganza. Forget all those craptastic power ballads and zone out to "Dude Looks Like a Lady," "Walk This Way," "Love in an Elevator," or even "Dream On." Hell, these guys should play "Cryin'," "Janie's Got a Gun," and "Pink," if they gotta. And let's hope they don't forget "Angel," the one shimmering exception that's the greatest power ballad of all time. See? That which makes Aerosmith awful makes Aerosmith oddly entertaining.