After 100 years, the Cleveland Orchestra Continues to Ignore Women, Minorities and Living Composers 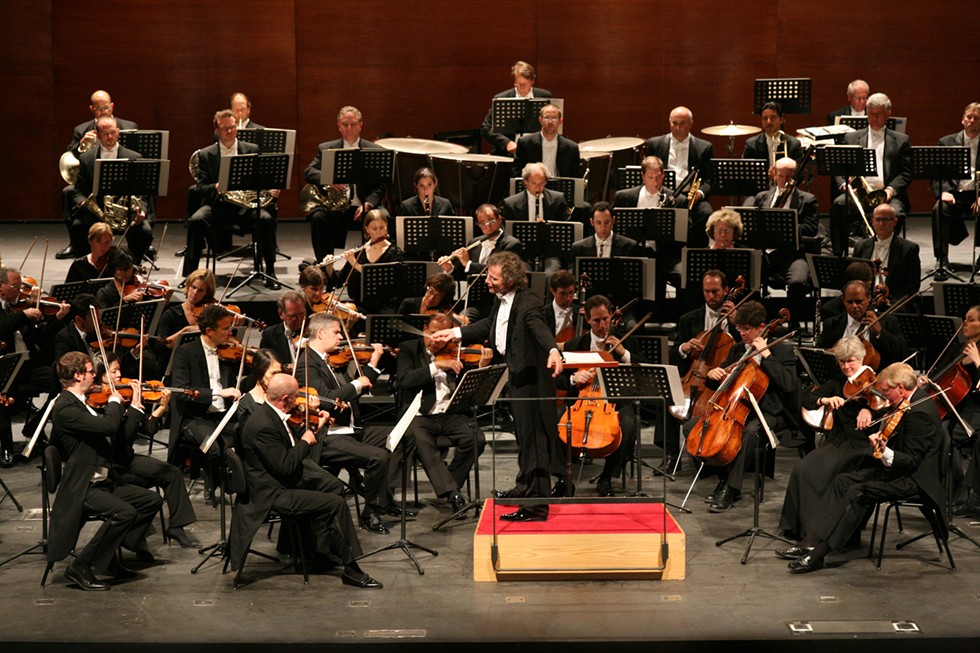 Just over a year ago, the Cleveland Orchestra announced its 100th season. The world-class orchestra kicked off its second century much the same way it operated during its first hundred years: with a bunch of dead white guys.

The marketing around the announcement was characteristically impeccable. The press release was chock full of high-minded rhetoric about music being an "incredible tool for good" and the orchestra's duty "to harness the life-changing power of music." Forget the snobbery of art for art's sake. This was an orchestra on a mission.

That mission is breathlessly spelled out on the orchestra's website. Among its lofty goals, the orchestra will remain committed to "community support" and "an unshakeable commitment to innovation."

Much of what the orchestra does is, in fact, innovative. The orchestra is well on its way to having one of the youngest audiences in the U.S., if not the world. The orchestra's adventurous opera productions consistently surpass those of full-time opera companies in terms of production and sheer music-making. Student subscriptions, generously subsidized by philanthropy, are more affordable than those for many other orchestras. And the orchestra maintains residencies at some of the world's most revered halls, including the Musikverein in Vienna and Lincoln Center in New York.

Yet the orchestra's commitment to innovation stops, frustratingly and inexplicably, with its choice of repertoire.

At the centennial announcement event last March, the artistic leadership unveiled a vision of the orchestra's future that proved as myopic as its past and present. For his part, music director Franz Welser-Möst delivered a passionate and refreshingly honest address. Here was a conductor of remarkable candor, who made jabs at "snobby Middle-Europeans" to a crowd of mostly older white patrons dizzy on free wine. He even compared a lack of daring in artistic planning to a slow death.

"We should look forward and not be afraid of what the future holds for us," Welser-Möst said. He went on, apparently roasting his own organization's artistic planning: "People sort of say, 'Yeah, we have to present it differently' and whatnot. You don't go to a museum and put ... disco lighting on a great painting."

At last, orchestra and audience alike seemed poised to break with the past and leap headlong into the future. Hell, a leap into the present would be cause for fanfare. Welser-Möst certainly sounded ready for the jump. The final salvo appeared to come as Welser-Möst compared those ubiquitous performances of Beethoven's complete symphonies — the pinnacle of symphonic achievement in the classical canon — to "a sort of sports event" among conductors. The New Yorker's William Robin has called such composer cycle stunts a "fixation," which is putting it modestly.

Well, it turns out to be a fixation shared by Welser-Möst after all. Contrary to his progressive rhetoric, the maestro remains planted firmly in the past. Welser-Möst did some soul-searching, and he now seems to think a musical pissing contest at Beethoven's expense is just what Cleveland deserves for its hometown orchestra's centennial. That's a remarkable change of heart from a maestro who, just a few breaths earlier, had derisively compared a complete Beethoven cycle to a sporting event (in Cleveland, of all places). We've seen the future, and it's a German who's been dead for nearly 200 years.

The vaunted centennial season turns out to be a disappointing continuation of the status quo. Of the nearly 40 composers represented, every last one is a white man. Only four of those white men are still alive. Of those four, only one is American-born. Last season, all but one composer (composer-in-residence Anthony Cheung) were white, only four had a pulse, and a lone concerto by Augusta Read Thomas kept the Cleveland Orchestra off of the Women's Philharmonic Advocacy's list of top orchestras that didn't include a single female composer in the 2016-17 season. The Cleveland Orchestra is far from alone in this regard. An analysis by the Baltimore Symphony Orchestra found female composers accounted for just 1.3 percent of all music performed by 85 American orchestras. How much longer will "America's best orchestra," as Cleveland was recently dubbed by The New York Times, set a worse example than its peers?

(Scene contacted the orchestra archives for repertoire lists going back to Welser-Möst's predecessor, Christoph von Dohnányi. Those records were not ready by press time, but an orchestra spokesman assures us they're working on it.)

Why is it that season after season, the orchestra's artistic leadership continues with the same backwards, systemically racist and sexist programming, and yet never faces even the slightest scrutiny? The incongruity between the orchestra's stated commitment to innovation and the music it promotes couldn't be more obvious. They are presumably committed to performing only the greatest repertoire. Yet it seems great music is only written by dead white men.

One has to wonder where Cleveland's music critics have been while this goes on year after year. Have they spent the past decade cowering lest they go the way of Donald Rosenberg? In other cities, it's ticket holders and musicians themselves who have taken orchestras to task for the industry-wide problem. A couple of months ago, 60 Boston-area musicians penned an open letter to the Boston Symphony Orchestra calling for it to include "musical talent that is too often marginalized." BSO management met with the signatories, though musical director Andris Nelsons was reportedly absent.

Patrons and musicians in Chicago, Rochester, Philadelphia and elsewhere have piled shame on their orchestras for entirely white, male seasons, and some are taking note. The Los Angeles Philharmonic will celebrate its own centennial next season with a staggering 50 world premieres by the likes of Philip Glass, Julia Adolphe, Tyshawn Sorey and Unsuk Chin.

But in Cleveland, the silent apathy is deafening.

The Cleveland Orchestra does occasionally present newer works alongside the familiar classics, but even then it's still almost exclusively a white man's world. Last December, a brief piece by English composer Julian Anderson opened a fantastic concert that also included a Mozart piano concerto and Brahms' First Symphony. Programs such as these are apparently proof that the orchestra and its audience value new or neglected music. But we all know that if a major work by a black composer — George Walker's Pulitzer-winning "Lilacs," for example — were placed after intermission, the hall would be virtually empty. Or at least that's what the orchestra's marketing department seems to think. Last weekend's concert featuring the phenomenal harpsichordist Jory Vinikour in a lesser-known concerto by Poulenc was billed as "Romantic Rachmaninoff." Rachmaninoff's Second Symphony is gorgeous and deservedly a staple of the orchestral repertoire, but why must the overplayed and familiar be more enticing than the adventurous and unknown? And after all, Poulenc is dead and white, too.

This disparity persists in part because so-called classical music lovers typically believe the myth that great music is that which has endured "the test of time." In fact, time is passive and indifferent and tests nothing. We, the audience, test music through listening and critical thinking and constant reevaluation of our aesthetic assumptions. This is the true music lover, not the person who gripes at intermission about too many snare drums and unpleasant chords. Music cannot be discovered and tested if it is never performed in the first place. The old way of thinking ensures that music by non-white, non-male composers will never measure up to anything written by a dead white man who gets played thousands of times each year in concert halls the world over.

The Cleveland Orchestra's leadership seems to get this point, at least in theory, paying lip-service to patrons who fill Severance Hall for progressive programming. The orchestra's director of artistic planning, Mark Williams, ostensibly has an important role in what gets played. For what it's worth, Williams is an African American with an enviable vitae, including degrees from the Cleveland Institute of Music and New York University. Before coming to Cleveland, he worked with the San Francisco Symphony, one of the trendsetters in progressive programming.

"This is a place that's ready, willing and eager to take on the challenges of the 21st century," Williams told Cleveland.com in 2013. "If we're not thinking about our audience, we're losing them. The audience here is so educated, and so open. If you give people quality, and you believe in it, nine times out of 10 it will work."

Five years later, his words ring as hollow as Welser-Möst's.

As paying audience members with a vested interest in the future of great music, we must hear new and neglected music, and we must hear it as more than a reluctant toss-off at the beginning of a concert. We may chuckle knowingly at the way early critics rebuffed Bizet's "Carmen" as too cerebral, or Beethoven's Second Symphony as coarse and unwieldy. If first impressions were everything, we would never enjoy a Mahler symphony or a Bach cantata. Yet we are content to allow today's masterpieces to languish without a second thought. After one poorly rehearsed performance, we make up our minds and get back to the same, comfortable drudgery. To make matters worse, the Cleveland Orchestra, when it performs new music at all, typically chooses the hair-raising pastiches of German expressionism that send audiences fleeing back to the comfortable classics. See how ugly new music is? Thank goodness we still have Mozart and Beethoven.

What about next season? It's hardly better in terms of gender parity; Pulitzer laureate Jennifer Higdon will be the only female composer we'll hear all year. Eight living composers, including assistant principal oboist Jeff Rathbun, will get stage time. Every last composer is white. Is this acceptable from an orchestra in a city where the majority of citizens are African-American, Latino, Asian or otherwise people of color? The orchestra's leadership will profess its devotion to all Clevelanders, perhaps pointing to a few yearly photo ops in schools filled with minority children from low-income families. But the faces filling Severance Hall each weekend almost uniformly reflect the faces of the composers heard there.

That's not surprising, because the fact remains: After 100 years, there is still no place for women or minorities on the musicians' stands at Severance Hall.