If UFOlogy is to your taste, you can get your fill -- and breakfast, too -- with the Art Bell Discussion Group at Denny's. 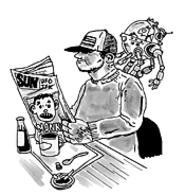 The Denny's in Garfield Heights is a pretty unassuming place. Most of the time, it's filled with senior citizens looking for a cheap meal or drunks sobering up over a dish of "Moon Over My Hammy." But on the first Saturday of the month, it's also the place where you can say, "I saw a UFO over my toolshed," with the confidence that instead of laughter, the likely response will be "That's nothing, you should see the crop circles in my petunias."

Once a month, the restaurant is the meeting lodge of Cleveland's Art Bell Discussion Group, a small gathering of disciples of late night's No. 1 radio program, Coast to Coast AM, hosted by Art Bell. The talk, over coffee, echoes the program's themes: alien abductions, time travel, the coming apocalypse. Conversations about government conspiracies lead to talk about "the mark of the beast," and most sentences start with "I don't want to sound paranoid, but . . . "

"It's a chance to network with like-minded people," says Mike La Riche, one of the group's founders who, in the '60s, had his own, short-lived "aliens-are-among-us" radio program.

Jason Pocaro, a self-described techno-geek who considers himself "open to things beyond physics," wants to assure the public that people who listen to Bell aren't crazies. "We're normal people looking at the strange," he says, though he admits there are parts of Bell's show that even he has trouble believing. "Some of the alien stuff is hard to deal with, but the haunting stuff is very believable."

But retiree Edith Mikula, another of the group's founding members, thinks that people now are more accepting of tales of extraterrestrial encounters. "Years ago, people were like 'Yeah, right,' but nowadays, many people have seen things. When people find out I'm into UFOs, they come up to me and say, 'I've seen them, too.'"

The truth is out there, and it comes with scrambled eggs.