It's never been easier to start your own (fake) band. 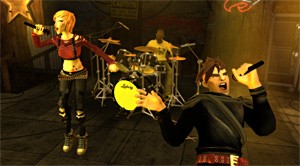 At a Guitar Hero tournament a few months back, one kid complained to me that Expert Mode is "too easy." Then he demonstrated the game's secret Hyper Speed mode. My pupils nearly ruptured at the sight of him as he navigated the light-speed stream of colored notes; it looked like the trippy ending to 2001: A Space Odyssey. The dexterous moppet didn't even break a sweat.

"You must play real guitar, right?" I asked in awe.

Music purists may wince and grumble, but it's a fact: Plastic guitars are here to stay, and instant guitar-god gratification trumps stumbling through "Smoke on the Water" in the garage. But these incredible rhythm-based titles also represent a new golden age of play for gaming purists.

Rock Band, the highly anticipated game from MTV that lets you play guitar and handle vocals, bass, and drums, has upped the ante in its bid to supplant Guitar Hero as the faux-music experience. Sure enough, Rock Band will have you grinning like an idiot before you even strum a note: The $165 bundle comes complete with rubber drum kit, drumsticks, Fender replica guitar, microphone, and USB hub to plug it all in. (If you dream of getting your Phil Collins on, there's even a headset adapter for simultaneous drumming and singing.)

If you've seen Guitar Hero in action, the game play here will be familiar. This time, however, there are three vertical sets of scrolling "notes" — for drums, guitar, and bass — instead of one, and a scrolling ticker of lyrics at the top of the screen straight out of Karaoke Revolution.

That kid from the Guitar Hero tourney surely will roll his eyes at the game's guitar licks, which are fairly easy even on Expert mode. But those who thought Guitar Hero III's insane difficulty was a sick joke will enjoy Rock Band's relative accessibility.

The drum kit lacks Blue Öyster Cult's all-important cowbell, but it otherwise feels incredibly authentic, right down to the kick-pedal. And unlike playing a fake guitar, banging the drums actually makes a skinsman out of you as you go — never mind that you'll be flailing like Animal from The Muppet Show at first. The game's greatest moment comes when you're allowed to freestyle your own impromptu drum fills (douche-baggy Lars Ulrich facial expressions optional).

But for all of Rock Band's triumphs, the game slips out of tune in its song selection — and in the sheer number of times you'll be forced to play them. Only 45 tracks are included, and six of those, disappointingly, are also found in Guitar Hero III.

Downloadable tracks should remedy this problem, but you'll still have to play some songs multiple times before unlocking new music.

Despite Rock Band's hiccups — including the fact that its essential mode, the four-player simultaneous "Band World Tour," isn't available in online play — it makes for an astonishing warm-up act for the series. It won't squash Guitar Hero, but a rumble between the two should translate to bigger and better music games for everyone. Even if nobody actually starts a band because of them.