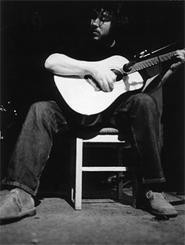 Jack Rose's latest album is deeply patriotic, and I can't stop spinning the thing. Almost every other night since its release this summer, I've cranked the self-titled disc before hitting the hay. It's kind of like back in the '70s, when television sent us to bed with an actual music video for "The Star-Spangled Banner."

Until last week, I didn't understand how this record hooked me. Many critics, including myself, consider Rose, in his mid-30s, one of the world's great acoustic-guitar soloists. But these days, when the "land of the free, home of the brave" behaves more like a violent junkie strung out on oil, music that invokes a sense of America is loaded with unwanted meaning. Don't get me wrong: I love twang, whether it's country, blues, or bluegrass. But it's the foundation of a national identity that's been hijacked by a Texas rancher and his gang of outlaw thugs.

Then I read a review of Rescue Dawn (by LA Weekly's Scott Foundas), which helped me define the patriotism in Rose's music. Hell, Foundas could've been writing about Jack Rose when he described director Werner Herzog's latest as a movie that "sees love for king and love for country as two separate and distinct things."

Jack Rose, you see, isn't just a collection of instrumentals; it's an American landscape. Rose, who opts for steel guitar this time around, tears into scraps of mud-caked blues, Appalachian folk, and archaic pop the way an Oklahoma farmer digs into red earth. On these seven bucolic tracks, there's no worshiping of monarchs -- only land, sky, and water. The actual country that is the United States: This is what the guitarist is patriotic about.

Just like the soundtracks to Dead Man and Paris, Texas, composed and performed by Neil Young and Ry Cooder respectively, Jack Rose is a skeletal work. Dead silence dwells in the spaces between picked strings and creaky slides. But what's beautifully unadorned to one set of ears is frustratingly incomplete to another. Rose doesn't dismiss his latest album, but he does believe it's a tad undercooked.

"With touring and paying the bills, I don't have the time to compose a record in my house for, like, four or five months," he says, taking my call from his home in Philadelphia's Fishtown neighborhood. "I put stuff together while on the run, and it's tough."

Rose is a cult artist without a day job; he can't hit the road without records to hawk. He often needs to "pump it out," as they say -- just like any mom-and-pop operation.

That's why, at least in part, the guitarist has gradually simplified his picking since 2001, when he dropped his first solo disc, Hung Far Low. Back then, Rose explored complex, Indian-inspired drones with far more frequency.

Rose's playing also feels more American with each successive release. After September 11, 2001, many indie musicians buried their heads in exotic psychedelia and fantastical folk, probably because reality was too harsh. But Rose, who's been listening to old-time music since his teens, did the exact opposite: He burrowed into the heart of the empire.

Jack Rose's sepia-toned cover image depicts an anonymous guitarist and fiddler sitting alongside a country road on a sunny day. The image, and the music inside, invoke a straightforward, agrarian America -- one that's nothing like the U.S. the guitarist lives in today, shrouded in pitch-black shadows and storming thunderheads.

But Rose ultimately succumbs to that storm. He closes the disc with a from-the-gut evisceration of Blind Willie Johnson's "Dark Was the Night." Weary and stricken with self-doubt, Rose's slide weeps for a lost nation.

Cooder, who recorded the Johnson classic several times, once called "Dark Was the Night" the "most transcendent piece in all American music." But I prefer Rose's version to Cooder's; it revives the raw dread of Johnson's original. When I tell Rose this, the guy is totally grateful, but he's already thinking about the next LP. Due out in mid-November, Dr. Ragtime and Pals will feature two songs from Jack Rose, redone as duets, as well as a more fleshed-out realization of Rose's America -- which is needed. This country yearns for a new vision, or at least an ancient one made new.