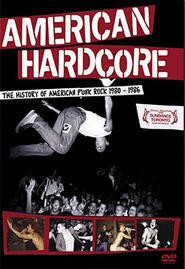 In the early '80s, hardcore punk blazed through the suburbs and slums of America, taking in kids who weren't content with Boston, Pat Benatar, or even the Clash.

Director Paul Rachman's documentary American Hardcore attempts to capture the violent energy of those early days, when the new music sped up punk's beat and deepened its DIY philosophy. With candid detail, Rachman traces the music's origins back to southern California and Washington, D.C., but he drops the ball when covering the other scenes around the country (and there were many). Midwest hardcore -- centered around the groundbreaking fanzine Touch & Go and groups like Negative Approach, Necros, and the Fix -- is reduced to mere snippets of footage and no interviews. The segment covering the eclectic Texas scene that spawned the Butthole Surfers and the Big Boys is nothing more than a collage of still photographs and grainy video footage. But for some reason or another, Rachman dedicates a good 15 minutes to Millions of Dead Cops, the most boring and clichéd group in the Texas scene.

For the uninitiated, this film is probably too jumbled to provide any worthy information, but for a true hardcore fan, it's a must-have for the rare live footage and interviews.