Flogging Molly learns that home is where the heart is. 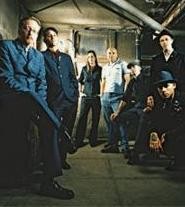 Sometimes you travel half the world in search of a truth that resides right in your chest. If there's a lesson simmering beneath Flogging Molly's mandolin trill, fiddle-fueled jigs, and punk-inspired guitar, it's that the truth will set you free.

Singer-guitarist Dave King was plucked from dead-end circumstances. As an 18-year-old kid in Dublin, he was anointed by Motörhead's guitarist, "Fast Eddie" Clarke, as the singer of his new metal band, Fastway.

"I'd seen Fast Eddie, literally, a month before, when he was with Motörhead at University Field in Dublin," King recalls, unfurling his story over the phone after stepping offstage at a festival in Australia, where he's playing on a bill with Story of the Year and Emery. "Phones were something we never had when I was growing up in Ireland. But a friend of mine, Paul Hannigan -- his family had a phone, and they lived a few miles away. I come home, and there's this push bike outside my mother's flat. It was my friend, and he said Fast Eddie just called. So I had to ride on the crossbar up to his house."

King sent Clarke a demo of his band, Stillwood, and next thing he knew, he was taking his first trip in an airplane. "It was crazy. A dream come true."

Of course, dreams are fragile things, prone to evaporating in the morning light, as King learned several years later, after Fastway had run its course.

He'd secured a solo deal with Epic, but when the label's producer suggested that King change the words to a song he'd written about his father -- who died when King was young -- the Irishman told the producer to go fuck himself and walked out.

Without a record deal, miles away from Dublin, unable to return home for eight years because of an immigration snafu, King sank into depression and drugs.

"To grow in life, I think you need to find your bottom," he says. "And at one particular point in my life, I found my bottom, a place where I don't think I could go any deeper or sadder.

"There was definitely a thud. It felt like 'Oh, my God, if I don't look up, I'm dead.' It was horrible, absolutely horrible. I honestly hope nobody has to reach that, but the fact of life is, people do. And certainly, for me to be talking to you right now, I personally had to do that. I'm not proud of it, but I did it, and now I'm just trying to do my best."

Vindication didn't come through the success he found with Flogging Molly. Sure, he's proud of the band's four albums and forthcoming documentary/concert DVD, Whiskey on a Sunday, which slap traditional Irish music on a rambunctious, punk-inflected chassis. But for King, happiness is being able to be straight with himself in his music.

"You can't be honest, unless you're honest with yourself. That's the bottom line," King says. "I mean, the first song I wrote was 'Selfish Man.' It's like 'Let's get this one out of the way.'

"For me, success is sitting at home at a table with my guitar, maybe having some whiskey and Guinness, and sitting there, pouring out a part of me I never thought I could. When I write a song now, I sit at my desk, and if it physically and emotionally moves me, that's all that matters to me. In that sense, I'm being honest and true to myself in a way I couldn't be in Fastway."

Almost from the moment Flogging Molly came into being as just a few friends playing music at the neighborhood bar, it was different for King from his previous experiences in other bands. There was an energy in the playful hodgepodge of personalities, from fun-loving guitarist Dennis Casey to kindly fiddle player Bridget Regan to former skateboard champ/accordion player Matt Hensley.

In the nearly 10 years since they formed, Flogging Molly's come a long way, but for King, the satisfaction is much as it's always been.

"One night we played 'Life in a Tenement Square' -- I remember it so vividly. It was such a hard life. With no water, nothing. And I see people dancing and singing. And I said, 'You know, I am so glad to see so many people happy from such a miserable fucking song,'" King says with a hearty guffaw. "But that's when it comes back. The being honest and being true about myself, people relate to that, and that's my reward."