Great smells and more emanate from Parma's Tay Do. 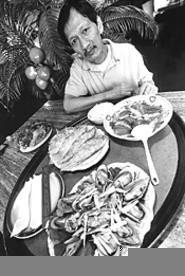 If olfaction is the queen of the senses, the fresh, herbaceous cuisine of Vietnam is fit for royalty. And if fragrance is the key to the subconscious, Tay Do is a portal to another world.

Which, come to think of it, is a good thing, since in this world, owner Loc Nguyen's little shoebox of a dining room in a cheerless Parma strip mall is the very essence of banal. The decor is bare bones (some mirrors, a plastic coconut palm, and a couple of dragons), and the ambiance is notable only for its absence: no tablecloths, no background music, and in the evenings, bright overhead lighting that leaves nothing to the imagination. This, however, is where the wonderful food comes in, elevating diners out of the dreary surroundings and into fields of cilantro and lime, lemongrass and mint, sesame and ginger.

Vietnamese food may be the original world cuisine, with influences from China (stir-fries, chopsticks, and a passion for noodles), Mongolia (beef), India (curries), and France (butter, cream, asparagus, and strong, thick coffee). Yet at the same time, the Vietnamese kitchen retains a strong individual character, most apparent in its devotion to fresh herbs and vegetables, and to nuoc cham, a zesty sauce of fermented anchovies, red chile peppers, vinegar, lime juice, finely shredded carrot and daikon, and sugar that is the country's principal table condiment, much like salt and pepper in the U.S. or soy sauce in China.

At Tay Do, the nuoc cham is plentiful, served in little individual bowls, where it's used as a dipping sauce for ephemeral crêpes, translucent rice-paper rolls, and subtle fondues. Its fragrance is sweet-tart and fruity, almost like lemonade -- a circumstance that makes its final peppery fillip to the taste buds that much more exciting.

The restaurant's menu is a thick 18-page opus, covering miles of culinary territory. Although some Chinese dishes are scattered throughout, most of the dishes are distinctly Vietnamese. There are shatteringly crisp fried spring rolls, stuffed with pork, shrimp, cellophane noodles, and finely diced vegetables. There is traditional beef fondue, with lean brisket sliced thin as carpaccio and cooked tableside in a broth of herbs and spices, then garnished with bean sprouts, julienned cucumbers, cilantro, and leaf lettuce, and rolled into sticky, see-through rice-paper wrappers. And there are broad, soft rice noodles, lightly pan-fried to produce a hint of smokiness and tossed with shreds of roasted pork, threads of tender-crisp vegetables, and a scattering of savory fried-onion flakes. Adventurers can fish for chunks of unboned catfish, simmered in caramel sauce inside a clay pot, or sample pork rinds tossed with curly rice vermicelli. Cowards can take a fallback position by seeking out a few of the familiar Chinese staples, like won ton soup, pot stickers, or sweet-and-sour pork. However, no one will be able to get away with a hamburger and french fries here: Canned soft drinks and instant coffee are as American as it gets.

Although most of the dishes feature relatively small amounts of meat, used almost like a condiment, the Buddhists' influence is evident in the variety of vegetarian offerings on Tay Do's menu. Rice noodles, egg noodles, fried noodles, and rice are enlivened with mushrooms, carrots, bamboo shoots, lily buds, tomato, or bean curd. In fact, Tay Do's cooks take bean curd (tofu) to new heights, frying it, steaming it, and tossing it with all manner of herbs and spices. If you still think of tofu as bland and featureless, try it in dau hu tam hanh, slender fingers of crisply fried, saffron-yellow bean curd sautéed with slivers of sliced scallions and toothpicks of pungent ginger root. Just inhaling the aromas wafting up from the platter was a pleasure. And the sense-enveloping flavor was like a stay at an exotic spa.

Because Tay Do's prices are astonishingly low, a party of four, say, can orchestrate a veritable banquet here, lasting several hours and accompanied by Tsing Tao beer and flowery jasmine tea, and still expect to pay only around $80 for the privilege. We began our own Saturday night festivities by choosing five different entrées (one per person, plus one for the table, a formula that generally provides plenty of food for sharing), and asked to have the dishes served one at a time, the better to appreciate their nuances. It would obviously take dozens of visits to taste everything on the enormous menu, but we tried for a representative sampling, starting with the beef fondue and followed by rice-paper rolls filled with minced pork, topped with thick slices of mild Vietnamese-style pork bologna and fresh mint. Then we proceeded to the show-stopping platter of fried tofu, followed by sautéed chicken, cut into bite-sized morsels and seasoned with lemongrass, layered in a pretty blue-and-white rice bowl with curly vermicelli, chopped lettuce, and slivered cucumbers. The pan-fried noodles and shredded pork brought the parade of main courses to an end, and we finished the evening with cups of dark, freshly brewed espresso, floating on a cloud of sweetened condensed milk. A server, who spoke little English, demonstrated how to vigorously stir the milk and hot coffee, then pour it into a tall glass of ice. Thick, rich, and energizing, it's a beverage that makes even Starbucks' macho café mocha taste like day-old Postum.

But as wholesome and delicious as all this was, if my life depended upon choosing one favorite dish, it would have to be the Vietnamese crêpes that two of us shared during a weekday lunch. The menu offers two sizes -- small and large -- and with a strapping young dining companion across the booth from me, I went for the large. Still, neither of us was prepared for the huge platter that our server bore to the table, heaped with stalks of fresh cilantro and mint, oversized lettuce leaves, sliced cucumber, and eight large, airy crêpes, moored by a filling of fresh bean sprouts, tender chicken morsels, plump shrimp, wild mushrooms, and chopped scallion greens. We each loaded a bit of crêpe, a sprinkling of herb leaves, and a wedge or two of cucumber onto a lettuce leaf, then rolled the leaves into functional if inelegant cylinders and dunked them in our own little bowls of nuac cham. Peppery yet sweet, crisp yet yielding, the contrasting flavors and textures took our taste buds by storm, only to disperse before a cleansing, astringent wave of mint and cilantro. For an instant, the intense herbal perfumery drifted through my head, conjuring up images of summer days and gardens well tended, where honeysuckle flourishes and soft breezes blow. Before the sensation could dissipate, I took another bite, then another. And in this fashion, my friend and I finished off the entire platter of crêpes and passed a lovely afternoon.

Not a bad deal for February in Parma, I reckon. No, not bad at all.