Memoirs of a Geisha views Japan through Western eyes. 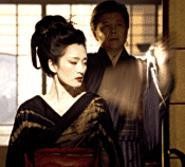 "Agony and beauty for us live side by side," laments Mameha (Michelle Yeoh), the most successful geisha in Gion. You'll know how she feels: Memoirs of a Geisha, as directed by Chicago's Rob Marshall, is beautiful to look at, but when it comes to the dialogue and storytelling, agony just might be the appropriate term. At least back when this same story was called Showgirls, there were lots of naked breasts.

Memoirs of a Geisha began life as a novel by Arthur Golden, who meticulously researched the topic and sucked the reader into this world with all the little details and nuances of the geisha trade -- which is analogous to the escort business, though not quite the same. But those nuances, almost by definition, are the sort of things that get lost when a 500-page book is adapted into a far shorter screenplay. The most controversial choice made by Sony Pictures, perhaps, was the decision to make the movie in English. Yes, the novel's in English, but it rather neatly sidesteps the issue by having it be a dictation by geisha Sayuri (played here by Ziyi Zhang) to an American reporter. Marshall, as he did in Chicago, plays the movie as though it's all an embellished memory inside Sayuri's head, but why would she remember everyone speaking in choppy English?

Okay, this may be culturally insensitive to say, but here goes: It's hard to tell, at least for the movie's first half, whether the mostly Chinese actresses are deliberately doing bad broken-Engrish Japanese accents, or whether they really do have trouble with the language. At times, some of the characters verge on sounding like Team America's Kim Jong-Il puppet. Since this movie is aimed at the art-house crowd and potential Oscar buzz anyway, would it not have been possible to make it in Japanese? You never think you'll miss subtitles until a movie like this comes along.

It begins in Japanese, with young Chiyo (Suzuka Ohgo) being sold into geishahood by her ailing and aged father (Mako). Then the English narration kicks in, with Shizuko Hoshi as the voice of the elderly Sayuri/Chiyo (geishas take on new names), and no further Japanese is heard. Narration is often used in movies based on books, as a way of getting some of the author's prose onscreen and because it's an easy shortcut for screenwriters. But Robin Swicord (Little Women), who adapted the novel for the screen, doesn't bother much with Golden's prose, apparently because it wasn't clichéd enough. Virtually every line of dialogue in the movie is transparent exposition, and just in case that's not enough, there's always a narrator to reinforce the point.

Sayuri immediately attracts attention because of her grayish-blue eyes, rare among East Asians. But not all the attention is good. Amid the strictness of the okiya (a geisha dormitory, basically), there is also a spoiled, perpetually drunk prima donna named Hatsumomo, who knows that this little girl will one day be more popular than she, so she decides to preemptively make life horrible. Essentially playing out the Gina Gershon role from Showgirls, Hatsumomo is the funnest character in the book, and as performed by Gong Li, she's the only lead female who makes the dialogue her own. Granted, as the villain, she doesn't have to do a lot of explaining, but as over the top as she is, she's more believable than the rest. (It's too bad Marshall hedges his bets on whether we're supposed to sympathize with her -- he sorta half goes in that direction, but doesn't commit.)

One of a geisha's primary goals is to land a danna, a man who will primarily own her services and be almost like a husband -- though not really, because the man most likely will be married, and his relations with the geisha most certainly are not equal, though it's part of the deal that he buys lots of expensive gifts. Sayuri's main contenders include the scarred war hero Nobu (Koji Yakusho, not nearly scarred enough for the character), whose interest she attracts by going with him to a wrestling show and pretending to be interested. (Note to American women: That's a really good tactic for winning a dude's heart.) Sayuri also attracts undue interest from Mameha's danna, the Baron (Cary-Hiroyuki Tagawa, who seems to be aging into a reincarnation of Pat Morita), while her true interest lies with Nobu's business partner, the Chairman (Ken Watanabe). By Western standards, potential romance with the Chairman is a little creepy: He was kind to Sayuri when she was a little girl and he was an adult, and she's been in love ever since. One can't help but feel that this is a bit like Bob Saget falling for one of the Olsen twins.