Authentic to the Core 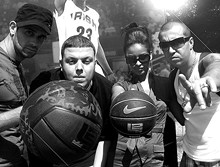 Arriving for the interview, they look less like a hip-hop posse than an ersatz Benetton ad: There's producer/hard rocker Ben Schigel (Switched, Chimaira) with his facial scruff and faded T-shirt; the tree-like King Dom moving with a lumbering, low-riding gait; muscular pint-size prodigal A-One — older, wiser and wired to get down to business; and slim caramel-colored nymph Carlicia with a megawatt smile and infectious, rambunctious manner.

This unlikely crew has aligned itself with Copywrite's Northeast Ohio hip-hop collective ODOT and is looking to make a splash over the next year with a slew of new releases, beginning with A-One's debut EP, Authentic.

"It's all tied in through the love of music," says Copywrite by phone from Hawaii, where's he relaxing on the beach before a couple of shows. "It's not just different faces doing the same music. We all do different shit, but it's a common wavelength that meshes well together."

Their shared comity is evident in the horseplay. Dom kids Carlicia about her use of the term "schwag," suggesting it's played out: "You might as well be wearing a throwback jersey." When she playfully comes at him, he puts her in a headlock, while A-One comments, "She's part Puerto Rican, part Irish. Imagine that temper."

But while they like having fun, when it comes to music, they're all about work. They spend a dozen hours at a time locked in Schigel's new Olmsted Falls studio with its idyllic backyard creek and undomesticated deer that are as aggressive as headbangers (Carlicia says she had to run back into the studio after Bambi charged her one morning).

They first came together working on each other's tracks, united by their connection to Schigel, who's always been intent on diversifying his portfolio. "People know who I am, but I want to be a guy known for doing all kinds of shit," he says. When Dom showed up to do some tracks for the first time and unexpectedly picked up an acoustic and started strumming Rush's "Limelight," Schigel was sold: "I was like, 'Damn.'"

Their varied tastes are expressed in the music. Dom sports a lean, party-ready rap swagger. A-One conjures an emotional R&B strut with shadowy trilling synths and combination speak/sung vocals. Little Carlicia, who's appeared on tracks by both artists, is capable either way, with a diva-worthy voice and a rap flow she's honed since she was seven, adept in both English and Spanish. "We did a couple of songs," says Dom. "It was immediately like little-sis status."

A-One is a late-comer to the musical party. When he was a youth, he played in pool tournaments and his dad took him around hustling unsuspecting marks. When he got older, he fell in with a bad crowd and ended up in the clink. It's there that he rediscovered his passion for music, initially fueled by all the Blossom shows (from James Taylor to ZZ Top and Debbie Gibson) his dad took him to as a youngster.

"I never took it seriously — the street was too much of a priority," he says. "But in prison, I was waking up at 7 a.m. and going to record, because no one would be in the common room at that time. So we could mess around."

When he got out, he started networking and met Schigel through Chimaira bassist Jim LaMarca. Schigel honed A-One's skills, encouraging him to sing more often and helping him trim the fat. ("He basically gutted me," says A-One.) Though they're celebrating the release of A-One's eight-song Authentic with a show at the Hi-Fi Concert Club on Sunday (there's also a pre-concert listening party with free food and cheap beer at Reddstone that same night from 4-8), both are looking forward to next year's full-length release, which may get distribution from Dom and Copywrite's label home, Man Bites Dog. Schigel expresses a similar anticipation for Carlicia's debut, which is also planned for next year.

"I want to make sure we have the right material," says Schigel. "The thing is, every time we're in [the studio], it keeps getting better and better. They've come a long way."

While A-One and Carlicia are busy planning their releases, Dom's got an album with Copywrite in the can (Misadventures of Dom & Pete) and his own full-length debut on the way early next year, produced by the Kickdrums. Copywrite's dropping Ultrasound: The Rebirth this fall, followed by his solo full-length, The Life & Times of Peter Nelson. Sometime next year, Dom would like to pull together an ODOT group album featuring members like Killah Kalam, Tage, Meta4ce, Catalyst and Jakki. In the meantime, the Cleveland franchise of ODOT is working on building a live band to back their performances.

"When we dream," says Carlicia, "we dream big."