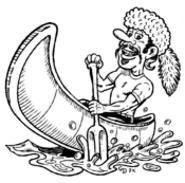 When a man smoking a clay pipe, wearing a coonskin cap, and speaking with a French Canadian accent walks up and offers you a set of throwing axes, you'd better take them.

"Just don't hit the car, no?" Foster Brown, historical interpreter for Cleveland Metroparks and leader of the voyageur canoe paddles, requests as he points out the target.

The canoe paddles, intended to relive the glory days of fur trading in the Great Lakes, run monthly at Hinckley and Wallace lakes in the Metroparks. But rather than sitting and watching reenactors muddle through a dramatization, participants are thrust right into the action: You throw the axes and paddle the 34-foot canoe -- and you have to sing the songs.

"Do you know what 'Alouette!' is about?" Brown asks after leading an all-French rendition of the familiar song. "It's about plucking the feathers from a lark -- from the back, wings, head . . ."

In light of the translation, the voyageur snack -- shredded beef jerky mixed with berries -- suddenly doesn't seem so appetizing. Especially when it also follows a show-and-tell of the pelts the trappers sought.

Mixed in with trivia about the fur trade are tall tales and jokes. Like the one about the fourth member of the crew -- now missing -- who was carried away by a fleet of mosquitoes after failing to apply his "skunk oil." Or the fact that the canoe you are traveling in is made from the "fiberglass tree," while originally it would've been birch.

"When we get home, we'll have a dance, no?" Brown suggests toward the end of the hour-long paddle. Back on dry land, he produces a fiddle, shows you the basic moves, then leads a short square dance.

The activity is a welcome break during a lazy day at the lake. Just follow the sounds of the French Canadian songs -- and duck if someone throws an ax.