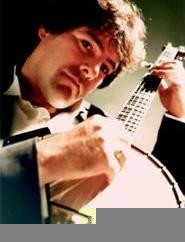 Like a picking and grinning Doctor Livingston, Béla Fleck is a musical missionary on a constant journey through undiscovered banjo country -- his partners in crime, the Flecktones, riding shotgun. For the last 17 years, this New York City-born banjo prodigy has traveled the world, fusing a traditional bluegrass instrument with every musical genre he came across -- jazz, rock, classical, country, salsa, pop, and (purists sighing) even hip-hop.

The band's latest album, The Hidden Land, is a set of 13 diverse-as-ever instrumentals that touch on everything -- jazz fusion, classical Bach, moody alt-rock, and bluegrass -- all at once. With no collaborations from Bobby McFerrin, Dave Matthews, or anyone else, the new album is a return to basics -- the jamming genius of its four core members: banjo badass Fleck, bassist extraordinaire Victor Wooten, oddball percussionist Future Man, and saxophonist/multi-instrumentalist Jeff Coffin.

"The last three albums we've had out were really big groupings of people, with lots of special friends playing. At a certain point, you have to remember, when you show up at a concert, it's going to be the four of us. We better make sure that we put that forward once in a while," says Fleck, relaxing at his Nashville home. "Not only did we want it to be just the four of us, we wanted to play it simultaneously. We didn't want a lot of overdubs and stacked things -- we didn't want to get artsy that way."

Instead, the band got artsy in other ways -- as on the opening track, which is a short rendition of the fugue from Bach's Prelude & Fugue No. 20 in a-minor. Fleck has translated classical pieces on banjo before. In late 2001, he released a solo presentation of Bach, Chopin, Scarlatti, and others, titled Perpetual Motion. But this number goes new places. The technicalities of Bach's score are reanimated with four different jazz harmonies -- a five-string banjo, alto sax, electric bass, and a synth-axe drumitar (an electronic drum shaped like a guitar that Future Man plays). For Fleck, it was the record's only collaboration.

"With Bach, it's almost like a conversation -- like reading a script of an incredible Shakespearean sonnet. Every note, every reaction, every thought is perfectly scripted," he says. "Maybe we'll do more of that at another point. This is just getting our feet wet."

At just under two minutes, the Bach piece is only a warm-up. Soon the foursome is plowing into the rock-jazz groove of "P'Lod in the House," riding on Coffin's slithering soprano sax and Fleck's flaming electric banjo. The album picks up steam quickly. "Labyrinth" sees Fleck leading the quartet through a series of musical jazz nuevo twists -- Wooten flinging bass around every corner, chasing Future Man's Mongolian-style throatsinging. "Subterfuge" draws the album into an eerie dark alley, where Fleck grinds his electric banjo like an axe-wielding madman. But maybe the best song is the final track -- "The Whistle Tune."

"We end with a very simple bluegrass banjo -- maybe in certain ways more traditional than anything we've ever done," says Fleck. "We're always trying to find a good melody, and that's an area we haven't over-mined."

Overall, The Hidden Land is tight, energetic, and raw -- a refreshing change from the group's arduous, three-disk opus Little Worlds, released in 2003, which was severely rambling and spread way too thin, with an overabundance of collaborators, styles, and filler. Columbia finally released a leaner 10-song collection (titled Ten From Little Worlds) just to make it more digestible. Instead, The Hidden Land finds the Flecktones concentrating on creating what their fans love most -- a studio album that captures the energy of the band's live performances.

This is the stuff that has won Fleck eight Grammys and 21 Grammy nominations in 10 different categories (more than anyone in Grammy history), and it's a return to the "blu-bop" mix of jazz and bluegrass that's the group's bread and butter, over 11 different studio and live recordings. Working together without collaborators meant the songs have had even more room to grow as the quartet finds more of the nooks and crannies, and since hitting the road, Fleck says, the songs have really bloomed.

"Now that we've been out on tour for three months, we're starting to exceed aspects of the recordings in the improv that is developing. And that feels really good," he says. "The melodies are going to be played pretty much the way they were, but the support -- it might be played differently every day. And then, of course, when the solo starts, we go anywhere we want. If someone wants to play longer one day, they do. If they want to make it a more aggressive solo, they do. If they want to play more introspectively, they do. And everybody is improvising. The big picture stays the same, but the fine print is different constantly."

Fleck's sense of knowing when and how to fiddle with the details has driven his career for years, and the Grammys are recognition of his ability to nail whatever style he's working in. The unifying facet is the poetry of the music, which -- without words -- offers conveyance wherever your imagination wants to go. The destination of such flights is always personal, but collectively, they compose the landscape of The Hidden Land.

"The hidden land is the place you go deeper within yourself to find your spirit and your musicality. There's a lot that's hidden in the world," says Fleck. "We're sort of a hidden part of what's interesting musically in the United States. Most people don't even know about us, but there's a whole world of music like ours. In this country, that music doesn't get played on the radio -- that music doesn't get played on television -- and yet it's thriving."

Shhhhhh! Don't tell anyone. Some secrets are best kept to ourselves.