The Bewilderbeast gets bitchy in Cleveland. 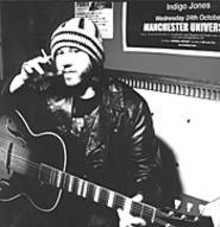 The Black Album Scheduled for release on November 14
British singer-songwriter Damon Gough -- a.k.a. Badly Drawn Boy -- is known for his graceful guitar-playing and sensitive lyrics about love and longing. But the stocking-capped little troll is also gunning to become the Axl Rose of folkpop.

"He writes songs for Hugh Grant movies," says Heather Milum, who attended Gough's November 11 show at the Grog. "I wasn't expecting him to be so surly."

How wrong she was. Moments into his first song, Gough stopped to admonish talkers in the crowd. "I'm not going to be able to do this gig if you don't fucking shut up," he cooed.

And these were his charming moments.

Between songs, Gough screamed at people toward the back of the crowd for daring to talk while he played. His between-song patter consisted of variations on the theme of "Shut the fuck up!"

An hour into the set, Gough had heard enough: He darted through the crowd to the bar, where he shoved drinks out of the hands of patrons, their beer glasses shattering on the floor. He then stormed back to the stage, played one last song, and split.

Twenty minutes and an apparent dose of Valium later, a contrite Gough returned to the stage for more. By then, only half the crowd had the morbid curiosity to remain. It's safe to say that Gough left Cleveland with fewer fans than he had when he arrived. Milum, for one, is off the bandwagon: "Now it will be difficult to listen to his lilting, melodic songs without picturing a very short, very angry man having a breakdown."

Says another fan: "People should have been showering him with beer bottles and telling him to fuck off. He was just an asshole. It was fun."

Earth to Eckart
Greater Cleveland Decay Association CEO Dennis Eckart gave something of an exit interview to WCPN-FM last week. Denny the Glib is leaving his post in December, reducing by one the number of public figures who begin every other sentence with the phrases "The fact is . . ." or "At the end of the day . . ."

But Eckart, as he is wont to do, didn't get through his chat without lapsing into impracticality. When the conversation turned to a new convention center, Eckart said that a riverfront site, along with Gund Arena and the RTA, would give the city the "capacity to compete for things like the NCAA Final Four."

Well, not really. Even if the urinals at a new convention center are gold-plated, Cleveland would not be in line for the men's college-basketball championship. The NCAA has set a 25,000-seat minimum on Final Four venues, making Gund Arena (capacity: 20,500) a non-option. The next three Final Fours will take place under domes in San Antonio, St. Louis, and Indianapolis.

"In a perfect world, we would love to hold our championship in Los Angeles, Boston, New York, Philadelphia, and Washington," the chair of NCAA Division I men's basketball committee once told USA Today. "But the reality we face is a demand for tickets that makes this an event screaming to be played in a huge arena."

Cleveland will host the women's Final Four in 2007, a prize snared two years ago, when the existing convention center was as crap-o-licious as it is now.

But appearing as it did on the sides of RTA buses -- in ads encouraging bored commuters to "perk up" with 92.3 Xtreme's Rover's Morning Glory -- the photo caused a few cases of Uncovered Mammary Syndrome.

RTA spokesman Jerry Masek confirms it received "a number" of complaints (he doesn't know how many) within days of the campaign's debut. That surprised the ever-randy Rover, who considered the ads almost tasteful. "The first response from everyone at the station was, 'Wow, I thought they'd be a lot racier,'" he says. "We didn't expect this at all."

So he urged listeners to call RTA in support of the campaign. Masek doesn't know how many of those calls were received, either. "But that wouldn't have made any difference," he adds. "We want people to feel good when they get on our buses."

RTA reminded the company that handles bus ads, Viacom Outdoor Advertising, of the clause in its contract discouraging "advertising that may be offensive to the general public."

I am not a villain
Art Modell is trying to rewrite history, casting himself as a victim of poverty, short-sighted politicians, and maybe even anti-Semitism.

In the article, Modell claims to be troubled by greed in the NFL. "The quality of ownership is not what it was in yesteryear," he says. By yesteryear, he apparently means the good old days when owners unselfishly yanked teams from cities to cash in on government subsidies elsewhere.

The piece also blames city politicians for not waking up to the reality that Modell needed coddling. "I wasn't greedy," he says. "It was survival, stupid bastards out there. The politicians should have known that. I told him that. 'I got to do something that would keep us competitive and keep our heads above water.'"

Referring to allegations by a former Modell exec that Cleveland didn't support Modell because he's Jewish and "was always viewed as an outsider," Modell says, "I would be destroyed if that would be revealed as fact."

He might be comforted to know that Cleveland does remember him that way. He was a guy who tried his best to screw the city and did a great job.