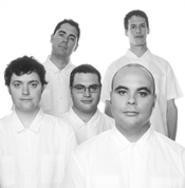 The Barenaked Ladies are one of those bands you must see live to appreciate. But what initially comes across as an irreverent stage show, complete with improvisational humor and odd cover songs (ranging from Survivor's "Eye of the Tiger" and Rick Springfield's "Jesse's Girl" to the Verve's "Bittersweet Symphony"), quickly becomes formulaic and predictable. Formed in its native Toronto during the late '80s, BNL quickly rose to the top of the Canadian charts, thanks to the success of its 1990 EP "Be My Yoko Ono" and subsequent debut, Gordon. Like fellow Canadians the Tragically Hip, BNL toured incessantly for more than five years, but couldn't achieve the same level of popularity in the U.S. as it had north of the border. Hits such as the melodic "Brian Wilson," the playful "If I Had $1,000,000" (which still finds overzealous fans throwing Kraft Macaroni and Cheese at the band in response to the lyrics), and the hip-hop-inflected "One Week" paid off with sold-out arena tours and platinum albums, but the band was still only good for a few good songs, and the covers often sounded better than its own material. The group's latest album, Maroon, isn't about to change any of that. The band's pop skills illuminate songs such as "Baby Seat" and "Pinch Me," but the hooks aren't as sharp in "Conventioneers" and "Hidden Sun," suggesting that the group's animated stage show won't be able to make up for its mediocre songwriting.