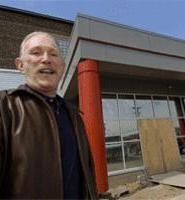 Walter Novak
Charles Fleck is converting an old Greyhound depot into a steamy funhouse for men.
Charles Fleck's money-colored eyes dart around the dusty old bus depot, searching for something new to show off. Here's where he'll put the Russian sauna. There, a eucalyptus-vapor room. Over there, the 18-man Jacuzzi. Even a room full of heating pumps is worth pointing out. "It's like something out of Star Wars!" Fleck says, and quickly moves on.

Not that he's in a hurry. He's just giddy about his creation. Building the country's coolest bathhouse apparently has that effect.

Fleck is a millionaire real-estate investor from South Florida, where he bought up the block made famous in There's Something About Mary. But upscale bathhouses are his passion. The West Side native built his first bathhouse near Detroit Avenue on West 32nd Street in the 1960s. He now owns the Flex bath chain, with clubs in Atlanta, Phoenix, New Orleans, Columbus, and Los Angeles.

But he saved his most ambitious project for his hometown.

The former Greyhound depot near East 26th and St. Clair will be 48,000 square feet of unfettered opulence -- a blue-tiled funhouse of private cabanas, steamy saunas, food, entertainment, and men. Lots and lots of men. When he's done, Fleck says, Cleveland will be home to the world's finest gay bathhouse.

"I'm not aware of one larger than that," says Scott Campbell, president of a California bathhouse chain. "He likes to do things in a grand way."

Fleck's grand adventures haven't avoided controversy. Some view bathhouses as little more than legalized brothels. Many were shut down in the '80s, with the explosion of AIDS. And they remain the targets of conservatives, health officials, and others who blame them for spreading sexually transmitted diseases.

In Atlanta, after he was denied his spa and liquor licenses, Fleck battled the city all the way to the Georgia Supreme Court. New Orleans also tried to deny his spa license, unsuccessfully arguing that he was running a sex club. He's still in court in Phoenix, where he was accused of running an illegal entertainment venue.

But industry veterans say that no one promotes safe sex better than bathhouses. Most clubs, including Fleck's, offer health screenings, literature on STDs, and boatloads of free condoms. "I'll show you my condom bill sometime," Fleck says. "I buy more condoms than anyone."

Because of decades-long efforts to clean up and regulate clubs, the bathhouse industry is experiencing a renaissance.

But at the moment, there's little to offer near 26th and St. Clair, except for cheap real estate, abundant parking, and some privacy. That's precisely what drew Fleck to the spot. He spent $1.2 million on the three-acre property, he says, and plans to spend $6 million more renovating the building. In his other markets, the project would have cost at least double.

And there's another advantage to Cleveland: He doesn't expect much opposition. When he opened his Columbus Flex near a library, he endured protests from conservatives, who gasped at what would go on in the private "cabanas." But his Cleveland club rests among business owners happy to see someone investing in the neighborhood, says City Councilman Joe Cimperman. Complaints about the club's sexual activity will "fall on deaf ears," Cimperman says. "I don't have enough time in my life to be a hater."

Drive around the block in Fleck's Cadillac SUV, and his vision for the neighborhood is obvious. "For sale?" he says, reading the sign on an old warehouse. "That would be a great disco." He has already bought a nearby nightclub, the Gotcha, and has his eyes on other property. He envisions several new bars -- and eventually new housing -- moving in after his bathhouse opens in July. Halfway through a tour of the future Flex, you begin to understand why.

Customers will come in through the original depot entrance and immediately be greeted by (no doubt strapping) receptionists. From there, they'll head into a spacious locker room -- Greyhound's original driver/mechanic locker room, Fleck says.

Beyond that will lie every imaginable way to relax. Fleck turned the depot's mechanic pits -- formerly used to service buses -- into an 18-man jacuzzi and a sizable indoor pool. Near that, shrouded by tropical plants, will be the shower area, its automatic shower heads spouting perfect-temperature water.

The club also will boast a cedar-lined Russian sauna, a eucalyptus vapor room, and a cavernous steam room. A full-service kitchen will provide food. And Fleck envisions a sprawling lounge and stage, which he hopes to use for live music or even Sunday church.

Twenty small "resting rooms" will be available for rent. If that's not enough, Fleck's converting the old bus-washing garage into a workout facility big enough for a college football team.

Up one of five stairways will be two small theaters, another shower area, and 100 rooms ranging from small "quiet spa rooms" to a "presidential suite." The suite will boast a 50-inch plasma screen and -- why not? -- a grand piano.

"Anything I want," as Fleck likes to say.

Off the downstairs lounge will be a tropical outdoor pool, which Fleck hopes to keep open year-round, "like a ski lodge." On the roof, the sun deck will offer views of downtown. The price of admission? Anywhere from 20 bucks a day to $250 a night, depending on what you sign up for.

Your local Y, this ain't.