RFK delivers a hazy portrait of a star-crossed leader. 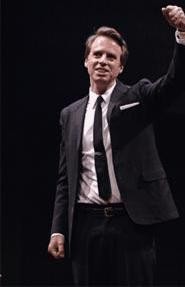 Bobby's tirade against his departed brother marks RFK's best moment.
Few who lived through nine weeks of 1968, from April 4 to June 6, can adequately explain the sense of hopelessness and despair that enveloped much of the country. In that brief span, Martin Luther King Jr. and Robert F. Kennedy were assassinated, sweeping the politics of ideas and idealism off the national stage and paving the way for the "law and order" administration of Dick Nixon.

Neither King nor Kennedy was exactly a paragon of virtue in all things, but each had compelling and transformative visions for the country. And the fact that their efforts were snuffed so prematurely has cast a shadow the United States has never been able to shake. In RFK, now at the Cleveland Play House, playwright and solo performer Jack Holmes reaches back to the tumultuous '60s and brings Bobby K. back to life. And while his impersonation is gawkily endearing, the play itself lacks the passion that drove this complex man in directions both admirable and unfortunate.

By loosely shuffling the chronology of Bobby-related events, ranging from his brutally effective supervision of JFK's campaigns to his courageous anti-apartheid speech in South Africa, author Holmes ably exhibits various facets of Kennedy's persona. We see his ongoing feuds with FBI director J. Edgar Hoover and mobbed-up union boss Jimmy Hoffa (when Bobby was President Jack's attorney general) and, it seems, most Democratic movers and shakers. When running for the senate in New York, he complains that he gets almost no support from his own party, noting wryly, "I can't even get the Rat Pack to sing for me."

The résumé of Robert Kennedy is jammed, since he participated in a number of historically significant events such as the Cuban missile crisis, the Bay of Pigs invasion, and the roiling racial unrest in major cities and college campuses. The script touches all these hot buttons, but it feels inevitably sketchy, since there is so much ground to cover.

And some of the transitions seem ludicrously forced, as when Bobby first tells a charming story about meeting his future sister-in-law, Jackie Bouvier, at a family touch football game: He throws her a pass; she exults by crowing, "I caught a bomb!" Then the lights dim, and Bobby is agonizing over the bombing (get it?) of North Vietnam. There are other cringe-worthy juxtapositions. An interview with a reporter at Bobby's sprawling Hickory Hill house, dealing with how close the world came to nuclear war during the 1962 missile crisis, is continually interrupted by the horseplay of his large brood (he and Ethel had 11 rugrats).

One result of this attention-deficit approach to storytelling is that all sides are slighted at the expense of a brisk pace. RFK was always considered a ruthless power player, but we get little sense of that, except for a couple grudging acknowledgements by the man himself and one brief moment when he dresses down a local mayor at campaign headquarters. Most of the play is involved with Robert's more honorable achievements, with large portions of the proceedings playing like stump speeches themselves.

Actor Holmes succeeds in making Bobby approachable, poking fun at himself for his wealth ("How can you forget a kid who delivers the morning paper from a limo?") and admitting he isn't fond of public speaking. But the real Robert exuded electricity when addressing a crowd, overcoming his natural shyness, and this is the irrepressible energy that Holmes doesn't quite capture. Without that piece of the puzzle, it may be difficult for those who weren't around at the time to comprehend what all the fuss was about.

But there is one scene that is truly riveting. In it, Bobby has a heated conversation with the specter of his older brother, railing against Jack's absence and emotional distance from him, even when they were physically sharing the same rooms in the White House. He cries out, "Where were you? Where are you?" and we get a powerful rush of Robert's conflicted feelings, along with the depth of his loss. If only more of this production, including a rather off-handed presentation of Bobby's violent demise during his run for the presidency, had that jolting immediacy.

It's not clear how much director Seth Gordon contributes to this effort, since it has been staged before at other venues. But it would help if someone would make the scene transitions crisper and more focused, so that one vignette doesn't blur into the next.

After Jack was buried, we are told Bobby turned to reading Greek philosophers, and he came upon this quote from Aeschylus: "Men are not made for safe havens. The fullness of life is in the hazards of life." That would certainly sum up the two star-crossed Kennedy brothers. It's just a shame that this play falls short of harnessing Bobby's charismatic magnetism.