How food took a backseat at Cleveland's most successful restaurants.

By Elaine T. Cicora [email protected]
The Year in Dining 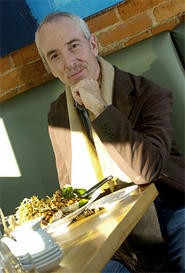 If anyone doubts that formal dining has become a culinary dinosaur, events of the past year -- most notably the demise of Century, at downtown's Ritz-Carlton, and Classics, in the InterContinental Hotel -- should prove instructive.

Both spots earned high marks with national surveyors, including AAA and Zagat. Both offered luxurious menus, doting service, and elegant appointments -- not to mention eye-popping prices. It's not that they weren't worth the big bucks, but for the majority of Cleveland restaurant-goers, the places were stuffy, one-time splurges, not part of their regular dining routine.

But trends are evolving. Century has given way to Muse -- a smaller, more intimate boîte just off the Ritz's main lobby, featuring a trendy "small plates" grazing menu in place of the traditional appetizer-salad-entrée lineup. (Never mind that the small-plates concept continues to be a hard sell in portion-conscious Northeast Ohio.) And at the InterContinental, look for Table 45 to debut in the spring, with an edgy, contemporary concept created by successful Tremont chef-restaurateur Zack Bruell.

"It's a national trend," says Zdenko Zovic, owner of XO Prime in the Warehouse District. "People are looking for comfort and entertainment. And especially people of my generation, we are looking for fun -- with great food and friendly service, of course -- but not stiffness and formality."

Which doesn't exactly mean we're dining on a budget either. Spots like XO -- where a starter of seared sea scallops and foie gras is pegged at $15, and a 12-ounce prime filet checks in at $37 -- fill tables with no trouble, especially on weekends. The real difference is that when members of the Red Bull Generation plunk down their cash, they don't want violins and tuxedoes -- they want a rush.

That's undoubtedly why regional trend-setters have been mobbing the newly reopened Lola, which moved from Tremont to downtown's East Fourth Street entertainment district in September.

"It's been a bigger success than even we hoped for," says owner and celeb-chef Michael Symon. "The response has been fabulous. Even for weeknight reservations, we're booked a week in advance."

The relocated Lola marks the third spot for Symon and his wife and business partner, Liz. Besides the downtown flagship, their properties include Lolita (in the former Lola space) and Parea, a contemporary Greek restaurant in the Flatiron District of Manhattan. All three debuted in the past 18 months.

When we caught up with Symon in early December, he was in his East Fourth kitchen, experimenting with a smoked walleye starter he hopes to add to Lola's adventurous New-American lineup. Despite the pressures of overseeing three restaurants -- he flies to the Big Apple every other week, where he spends two to three days, then divides the remainder of his time between Lola, Lolita, and duties as spokesman for Calphalon cookware -- he says the expansion process has held few surprises.

"I think our biggest advantage was waiting nine years before we opened a second restaurant," he says. "That gave us time to build a great base of employees, who help us run each spot the way it should be run."

Still, Symon tinkers constantly with the concepts, trying to find just the right balance between artistry and accessibility. For instance, he recently backed off from the small-plates concept at rustic-Mediterranean Lolita -- "People just don't get it," he sighs -- finally surrendering to customer demand to bring back former Lola faves like the Fred Flintstone-sized rib steak and his popular macaroni and cheese.

Meantime at Lola, he and Liz focus on maintaining a funky, energetic ambiance as attractive to tattooed twentysomethings as to white-collared business types. And while dinner tabs can easily top $50 per person, that hasn't dampened the enthusiastic response.

"Clevelanders, New Yorkers -- it doesn't matter," Symon shrugs. "When people go out to eat nowadays, they want great food, but they also want to have fun. If there was a common thread between Classics and Century, it was this: They simply weren't fun restaurants."

For East Fourth Street developer Ari Maron, the concept is all about fun. That's clear in the blend of businesses he chose, including Lola, Pickwick & Frolic, House of Blues, and Flannery's Pub -- along with 250 luxury apartments on the upper levels, boasting a remarkable 98 percent occupancy. It's clear, too, in the recently opened Corner Alley and 4th Street Bar & Grill, a unique blend of state-of-the-art bowling, booze, and a handsome sit-down restaurant, with a menu that treats familiar ingredients to trendy, global twists.

There's more to come this spring too, including Teresa's Pizza, featuring pizza, pasta, beer, wine, and downtown lunch delivery; and La Strada World Café, a 3,000-square-foot Mediterranean restaurant and market. Maron says negotiations for the three or four remaining spaces are nearly complete, and plans for those spots should be announced shortly.

And then there's Zocalo Cantina, a new offering from Trifecta Management Group, the California entertainment-concept developer responsible for the Corner Alley.

According to Trifecta partner Mike Auger, even finding the place will be a hoot. "You'll head down this little alley (roughly across the street from Lola), maybe wondering where the heck you're going, and then all of a sudden, there it is -- a real hole-in-the-wall! We're even thinking of putting up a sign: 'This way to Mexico!'"

Look for the menu to focus on regional fare, mainly from the Yucatán Peninsula, Veracruz (known for seafood), and Puebla (famous for dark, spicy mole poblano), along with freshly made tortillas and made-to-order guacamole, prepared tableside.

But it's Zocalo's bar scene that gets Auger most hyped, featuring what he swears will be the largest tequila selection in the region. And while he's irritatingly coy about the details, Auger promises the tequila "delivery system" will be something special too.

Bongs? Funnels? Intravenous? He's not saying. "All I can tell you is this," he chortles: "It's gonna be a whole lotta fun."

Your Table is waiting

Zack Bruell has spent years on the cutting edge of the fine-dining scene, from 1980s groundbreakers Z and Z Contemporary Cuisine to present-day Parallax in Tremont. Finally, he says, he gets it.

"The food is important," he allows. "But dining out? It's foreplay. It's about people fucking. And it doesn't happen in a plain, white space."

Enter his newest concept: Table 45, the sexy, seductive 130-seat restaurant and 50-seat bar scheduled to debut at the InterContinental in April. After hammering out the design details since last January, Bruell calls his collaboration with the world-renowned InterContinental "big stuff."

"It's the future of hotel dining," he claims, combining the sizzle of an independently owned operation with the kind of worldly reach -- and big money -- that only an international corporation can muster. What results, Bruell hopes, will be a compelling global concept, as capable of wowing diners in Rome or Barcelona as on the shores of Lake Erie.

At this point, though, the operative words are all about style: modern, casually elegant, and what Bruell calls "informally formal, the kind of place you could come in blue jeans or a business suit and not feel weird." High-tech lighting and an edgy soundtrack will reinforce a sense of theater, and service and appointments will be relentlessly artful and high-end.

While details are still simmering, the chef promises a worldly menu, rife with luxury ingredients, subtle sauces, full flavors, and an emphasis on grilling. A tandoor is in the picture, too -- although Bruell still isn't entirely sure how he'll use it. Prices will be high, yes, but not too high. ("This is not a restaurant just for people who have money!") And the energy level can be as raucous -- or as intimate -- as any hipster could hope for, with seating options ranging from the noisy open kitchen to private tables snuggled in the back.

While Bruell is banking on the concept -- he calls it "the project of my life" -- growing beyond Cleveland, he tries to maintain perspective. "If this doesn't go well, I have two things to lose. One, my reputation, and two, this wonderful opportunity. So I really feel I'm at a crossroads."

In that sense, Bruell and Cleveland's dining scene are walking hand-in-hand.