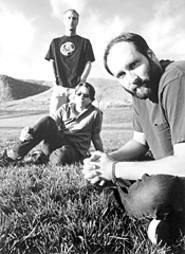 Built to Spill's frontman (right) is Martsching to a different beat.
It's hard to imagine a more self-effacing guitar hero than Doug Martsch. The leader and driving force of Built to Spill -- Boise, Idaho's greatest claim to musical immortality -- Martsch brings to mind Robert Christgau's old line (in reference to T-Bone Burnett) about being unable to resist a humble man with a proud guitar.

Without question, Martsch has done more than anyone since Dinosaur Jr.'s J Mascis to make endless guitar noodling a respectable facet of underground rock. But during a phone interview from his Boise home, he audibly winces at the notion he's anything more than a severely limited amateur on the six-string.

"I think most people that think I'm a great guitar player don't really know that much about guitar," he says good-naturedly. "The guitar players that know stuff can watch me play a show and think it sounds good and stuff, but I'm not doing anything very tricky at all."

What even the reflexively humble Martsch acknowledges, however, is his unique ability to stitch together modest individual guitar parts into an impressive whole. His intertwining, serpentine phrases are rarely self-indulgent in the classic-rock, Ten Years After sense, because they feel like they're built into the structure of his songs, not added as ornamental afterthoughts. And his knack for melody manifests itself in short instrumental phrases that answer and complement his soft, endearingly whiny vocals.

It's an approach that takes hours of painstaking, solitary work, with Martsch patiently honing his ideas on eight-track home demos. More than a decade into an acclaimed -- if commercially indifferent -- career, Martsch is finding the creative process to be more of a struggle with each passing year.

Speaking in the same fragile, Fred Rogers voice he's patented on seven albums with Built to Spill and two with his early '90s Seattle band, Treepeople, Martsch seems every bit as Zen-placid and well-adjusted as his squealing solos are feverish and tortured. He describes his life as quiet and uneventful. He says he rarely goes out, unless it's to shoot hoops at a neighborhood basketball court. And, much more than music, the focus of his life these days is his seven-year-old son, Benjamin Cleo (for whom he penned the 1994 BTS song "Cleo").

Either because of creative lethargy or a preoccupation with fatherhood, Martsch had a hard time focusing on music last year, when it came time to start on a new Built to Spill record. "I think I was distracted and interested in doing other things," he says. "I just wasn't working as hard on it."

The resulting album, Ancient Melodies of the Future, may have been slow in the making, but it's brimming with the kind of thick, fuzzy guitar textures and sugary pop melodicism that Martsch has appropriated since forming the band in 1993.

Although it could be argued that BTS's approach has changed little over the years, Ancient Melodies offers proof that Martsch is still willing to tinker with the sonic palette of the band. The insistent "In Your Mind" melds marimba drones with Martsch's acoustic-guitar strumming and climaxes in a Middle Eastern orchestral flourish. The album-opening "Strange" features Cars-inspired synth gurgles beneath Martsch's spacey slide guitar and disorienting backward tracks.

Throughout the record, the band adopts an unusually orchestral approach, employing real and synthesized strings to create a cushion for Martsch's brooding fretwork. If the results aren't as consistently explosive as 1999's masterwork Keep It Like a Secret, they nonetheless indicate that Martsch is unwilling to allow his sound to settle into a musical formula.

On Ancient Melodies, Martsch doesn't rise to such playful heights, but his laconic wit emerges in subtle ways, such as on the chorus of "Strange," when he makes the determination that "life is strange, but oh well."

This sense of mature acceptance is a considerable leap from Martsch's teeth-cutting days as an angry young punk adopted by the Seattle hard-core scene of the late '80s. In 1988, Martsch and the fellow members of a Boise band called State of Confusion relocated to Seattle ("That's just something you do if you live in Idaho") and changed their name to Treepeople.

Alternating on lead vocals with guitarist Scott Schmaljohn, Martsch's high voice brought a shrill sense of desperation to songs that were defined by equally frenzied guitar eruptions. In the wake of Nirvana's 1991 commercial breakthrough, as a nation fixed its gaze on the flannel-shirt phenomenon of Sub Pop Records, Treepeople toiled in obscurity for the lesser-known C/Z label.

"There were other music scenes besides the Sub Pop scene, and we became involved in the hard-core, all-ages thing and played a lot of those shows," Martsch recalls. "There were a bunch of straight-edgish kids that took us in when we first arrived and had somehow gotten a copy of our first demo tape. We did pretty well playing those kinds of shows. We were really lucky. We started playing right away and played a lot the whole time we were there. But we never did that well. The band was never very popular, until right about the time we broke up."

In 1993, Martsch left Treepeople and moved back to Boise to be with his girlfriend. He quickly formed Built to Spill as a concept that allowed him to work with an ever-shifting group of musical cohorts. Since 1997, however, when the band made its major-label move to Warner Bros., its lineup has centered on Martsch and the rhythm section of drummer Scott Plouf and bassist Brett Nelson.

Because the band's lineup is split between Boise and Seattle, the members face the Pavement-type predicament of being able to play together only when they're recording or touring, but the band's musical cohesion doesn't seem to have been adversely affected by the long-distance relationship, at least based on the evidence of last year's Live collection.

Though long-winded at times (a 20-minute version of Neil Young's "Cortez the Killer" can test anyone's love for this great song), the album proved that, contrary to his own modest denials, Martsch can stretch out on the guitar without repeating himself. Although he's reasonably pleased with the live album, Martsch reveals that the idea took some record-company cajoling and a commitment to perform on the HBO live-music show Reverb.

"For Reverb, they have their own studio and their own people to mix it, and I was trying to get Warner Bros. to fly [Built to Spill producer] Phil [Ek] out to do it, but they didn't want to pay the expense," he says. "And I didn't like the idea of some stranger mixing our show. So it kind of worked out that if we made the live record, then Phil would be able to mix it. So for me, it was a matter of getting the Reverb show to sound good.

"I kind of thought it was a bad idea, but I didn't think it was that bad of an idea. The performances were good, and it sounded cool. I just thought the idea of a live record seemed kind of premature. But I figured, 'Whatever.' Some people will enjoy it. I don't really care if it sells a bunch."

With Ancient Melodies marking the final album in the band's contract with Warner Bros. and with none of their records having sold more than 86,000 copies, it seems inevitable that BTS and the label will part ways. Martsch says he has no idea what will happen with Warner Bros., and he sounds unconcerned, convinced that such issues are out of his control.

"I can't do things differently than I do them," he says. "I can't make better music or more commercial music or anything. To me, my music is pretty commercial anyway -- just regular pop-rock music.

"I think I make music a little bit different since I've been on Warner Bros., but that would have happened even if I was on Up Records at that point. Because that was the point after There's Nothing Wrong With Love, where I knew that a bunch of people were listening. And I think that affected the way I make music more than the label. Just the fact that I knew there was an audience. Up until then, with everything I'd done, there was no audience."

Martsch seems to accept the fact that, as a dedicated father in his mid-30s, he no longer finds music the all-consuming passion that it was in his Treepeople days. That's why it doesn't bother him that his bandmates live hundreds of miles away from him, and that's why he sees to it that Built to Spill never stays on the road for more than a month at a time.