Raise a toast to the false prophet's demise. 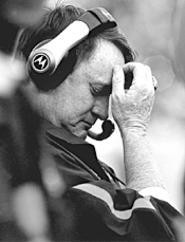 I saw my first live Browns game about a decade ago. At the time, ticket prices were roaring beyond the reach of working people, and stadiums once filled with decent Americans, like the kind you'd find at a VFW fish fry, were beginning to look like conventions for the U.S. golf-shoe industry.

Even hockey -- formerly the province of guys in orange hunting jackets who'd been wearing the same sweatpants for five days -- had gone dainty. They started serving wine.

But not in Cleveland. And not at Municipal Stadium. From my seat in the last row of the upper deck that day, I witnessed the treasure of 74,000 hammered people in his-and-hers Bernie Kosar jerseys shouting expletives of encouragement to the hometown boys. Envision a Ukrainian prison on 50-Percent-Off-Potato-Liquor Night.

It was testament to the raw joy sports can inspire, tribute to the buying power still possessed by Teamsters' and iron-workers' paychecks.

I'd never seen anything so beautiful.

Over the next decade, in all my worldly travels to places like Buffalo and Nebraska, I'd tell anyone who'd listen that they hadn't truly seen sports till they'd seen a Browns game.

Then, last year, I went again, with my son and his friend. Like all dads of a certain low-rent pedigree, I worried about my boy's growing affection for skateboarding. I wanted him to embrace the weirdness and passion that is football. The Browns would be his cure.

Then we encountered The Impostors.

It was a wretched game versus the Cardinals. The Browns won big -- but only because Arizona recruited its players from a Phoenix volleyball team. The crowd was now subdued. Everyone seemed to understand that we'd paid $37 a seat to worship false prophets. So we spent the afternoon watching the kids chuck ice cubes at Cardinals fans a few rows up.

I had long sensed something evil about this guy. He took the slave-trader's approach to football so en vogue with the modern coach. He couldn't see the desire or hunt in a man, only his 40 time and bench press. I imagined him going to the NFL combines in tights and a powdered wig, as if he were on the docks of South Carolina, circa 1750.

Butch was building a team to look good on paper, not on the field.

What gifts he had were oddly Stalinesque. With each year of losses, he would kill new rivals, sacrificing coordinators, receivers, even PR flacks, as if they were the root of these failures. By the end, there was so much blood in Berea they needed a Red Cross clinic on the practice field.

Everyone's seen a guy like this in the workplace: the skill-less ass-kisser who rises to the top, then slays his enemies one by one -- until a few years later and you're all in bankruptcy court to collect that last check. Butch was better suited as a second-tier executive at Enron, where he could weasel into Ken Lay's foursome at the charity golf scramble. Here was a man who'd have no problem sinking the pensions of retirees just to move to a more prestigious cul-de-sac.

From that day forward, I rooted against the Browns.

Confession: I even rooted for Pittsburgh.

There were many of us out there, though to say so publicly would get one's ass kicked in the finer establishments around town. We believed the Browns would not rise again until the death of Butch.

On the day before he was whacked -- nobody gets $12 million to quit -- a buddy remarked on the Bengals game the previous afternoon: "Finally, a reason to root for Cincinnati," he sighed. Yes, it had gotten so bad we were rooting for Cincinnati. We are now fabricating good lies to tell St. Peter.

Butch went out like you'd expect, a con man confronted by irrefutable evidence. He still blustered about injuries and close losses, as if the Browns' collapse was a series of valiant misses. But he was "suffocating" under the pressure, he said. Yes, he was now a victim.

It was all very candy-assed.

Truth be told, there's no easier job in the NFL. Despite six years of sucking, the team still sold out. Better yet, the Cleveland sports media might well be a chapter of Sycophants Anonymous. It's not just tame by New York standards; it's limp-wristed even compared to midwestern cities like Detroit and Minneapolis.

When news broke that Butch employed spies in the locker room and that players believed his word was as good as a White House press secretary's, it came from national reporters, not the guys who spend every day in Berea. You could coach the Browns by day and be the Torso Murderer by night, yet Mike Trivisonno would still beg to do your laundry.

Cleveland fans don't need much. We can handle defensive ends with the fragility of figure skaters, running backs who can't even tell the cops a decent lie when their wives stab them, and quarterbacks who look like the second coming of Dan Marino one day and the actual Second Coming the next. (Jesus, as we know from the Sacred Texts, struggled with the deep out pattern.)

All we ask for is a playoff berth every five years or so -- and gallant mediocrity the rest. Give us Steve Heiden, Andre King, and Orpheus Roye. The key is rootability. Just don't give us another Enron executive as a coach.

The fish, it is said, rots first from the head.