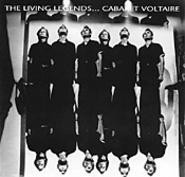 We tend to link musical styles closely with fashion trends. It's now almost unthinkable that, in the mid-'70s, when hair was feathered, bottoms were belled, and disco and arena rock ruled the airwaves, three gaunt young men were sequestered in an attic in Sheffield, England, grinding out unorthodox sounds with reel-to-reel machines and primitive noisemakers. By 1978, with punk in full swing, the fashions of the day finally caught up with Cabaret Voltaire. Over the next three years, the trio of Richard H. Kirk, Stephen Mallinder, and Chris Watson released a host of singles and three amazing albums for Rough Trade Records.

Now, Mute Records has rereleased those albums -- Mix-Up, The Voice of America, and Red Mecca -- along with a singles collection, The Living Legends. The four CDs make it clear that this was a group way ahead of its time, one that prefigured much of the industrial, electronica, and avant-garde alt-rock to come. "Kirlian Photograph," which opens the 1979 debut Mix-Up, must have sounded absolutely otherworldly when released, with its walking bass line underpinning a bleating saxophone, angular sheets of guitar noise, and semi-discernible growls and yelps.

The following year's The Voice of America found the band embracing a sound that was at once cleaner and meaner. The drum machine patterns are more insistent, the guitars more abrasive, the vocals more sinister. And the music keeps moving outward: The Moogy skronk of "Partially Submerged," part Krautrock and part free-jazz, anticipates Cologne's improv glitches, Radiohead's sprawling rock, and Aphex Twin's Dramamine ambiance.

By the third album, Red Mecca, Cabaret Voltaire's experiments became more focused, stripping away the excess flesh to reveal muscular rhythms. The record swings from "A Touch of Evil," a dissonant mash-up of synthesizers and bongo drums, to the slap bass of "Sly Doubt," a track as funky as anything Cabaret Voltaire recorded.

For a last glimpse back at Cabaret Voltaire's uncompromising origins, there's The Living Legends, featuring singles such as the acid-soaked "Do the Mussolini (Headkick)" and the analog skank of "Talk Over." Taken together, these albums show a group ably feeding off punk's iconoclasm while refusing its generic ossification, blending modernist experimentation with situationist critique, and rocking like crazy.