With Donner Party Leftovers and Xela. Thursday, May 11, at the Grog Shop.

By Melody Caraballo
Captured! by Robots 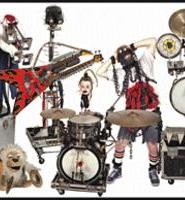 Are you into funky metal-influenced garage-punk played by sadistic cyborgs who would just as soon slit your belly open as play Kool & the Gang's "Celebration"? Wanna get married by a Universal Life Church minister who's usually wrapped in chains, because for the last 10 years he's been a prisoner of the aforementioned robots? Seriously.

Sole hominid JBOT and his captors are prepared to unite couples, as long as the couples are prepared to be ridiculed by the axe-slinging GTRBOT666 or mawkishly adored by Ape Which Hath No Name. (And while Dubya may not recognize same-sex marriages, JBOT will perform legally nonbinding unions as well.) It'll be covers all night, but with that special slapstick and ska-influenced showmanship that's kept the "band" blasting pugnacious beats and industrial-strength riffs for a decade. To embark on your adventure of marital bliss, contact [email protected], and don't worry about the robots' plans for world domination. They'll need workers.