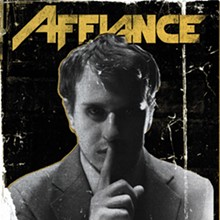 Affiance start their debut album with Peter Finch's famous Network quote: "I'm mad as hell, and I'm not going to take this anymore!" And in "Call to the Warrior," Dennis Tvrdik sings, "Through the darkness, we will fight." No Secrets Revealed is pretty much the band's call to arms. The intricate guitar lines racing through "Nostra Culpa" and "For Power" are more old-school metal than new-school, but Affiance shred with relentless precision. "A Monster Fed" boasts such theatrical flair, it wouldn't sound that out of place squeezed between the latest from Avenged Sevenfold and My Chemical Romance. — Niesel

With Memphis May Fire, Destruction of a Rose, Amarna, Reign, Skies of December, Along Came a Spider, and Lystrata. 7 p.m. Friday, December 3, at the Phantasy. Tickets: $13; call 216-228-6300 or visit phantasyconcertclub.net.