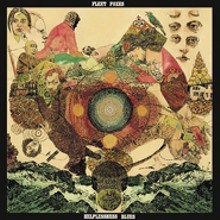 There are moments on Fleet Foxes' second album when the vocal harmonies are so clean and the melodies are so crisp that you half-expect the brittle edges to fall off. The Seattle sextet's self-titled 2008 debut drew comparisons to Crosby, Stills & Nash and other Woodstock-era hippies for its laid-back, folksy songs. Helplessness Blues is still loaded with taut harmonies and lazy-day tracks, but there's a sweeping scope to the album that tightens the band's sound while also opening it way up. Frontman Robin Pecknold kicks back with an elaborate set of songs, like opener "Montezuma" and the gliding title track, about growing up and fitting in. But he outdoes himself on the eight-minute "The Shrine/An Argument," where he becomes one with the world. — Michael Gallucci