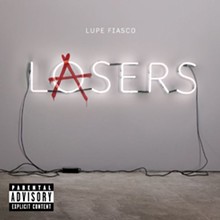 Lupe Fiasco has already caused a shit storm with his third album, disowning Lasers before it was even released. Four years in the making, and tweaked and delayed numerous times along the way, the album is a hodgepodge of styles, producers, and guest singers. It's a more pop-oriented and less focused outing than the Chicago rapper's previous two albums. But Lasers isn't a total washout. Lupe shows off his slippery flow and fires off some great lines in the twitchy "The Show Goes On" and the biting "Words I Never Said." Still, too much of the album plods without direction — odd, considering 2006's debut, Lupe Fiasco's Food & Liquor and its follow-up, Lupe Fiasco's The Cool, were so concept-driven. It all makes Lasers' 47 minutes seem much longer. — Michael Gallucci