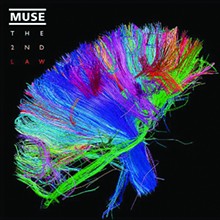 Until the release of 2009's Resistance, the English rock act Muse was much more popular in the UK than in the States. But Resistance delivered two commercial rock radio hits, and everything changed. Given that the stakes are now much higher, give these guys credit for not catering to the masses with the album, the anticipated follow-up to Resistance. The disc commences with the Radiohead-like "Supremacy," a tune that shows off Matthew Bellamy's ability to switch into a soaring falsetto that would make Freddie Mercury proud. Bellamy is in fine form here as he gets his funk on during the horn-driven "Panic Station" and effectively whispers his way through "Animal." The album has its missteps. "Follow Me" borrows a little too liberally from U2, and the theatrical "Survival" doesn't quite work. But overall, this is an adventurous album that shows this band is still peaking.