'Cause I Sez So (Atco/Rhino) 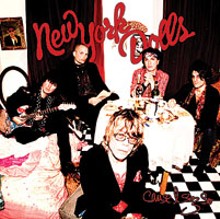 If lightning never strikes twice in the same place, then what do we make of the reunion between the New York Dolls and producer Todd Rundgren, whose first pairing on the Dolls' 1973 debut resulted in one of the decade's most enduring and influential documents of pre-punk rock mayhem? Is 'Cause I Sez So an attempt to recreate the bottled magic of three and a half decades ago? Hardly, and both the Dolls and Rundgren recognize this.

Only David Johansen and Sylvain Sylvain survive from the original Dolls, and there's the little matter of 36 years of accumulated history; you can't unring a bell. So you do exactly what Johansen, Sylvain, the new Dolls and Rundgren: they make a statement about where the band is now, not where it's been, and there's no better example of this than on the laconic reggae/'60s pop reworking of their snarling punk ode "Trash." But just as "Personality Crisis" led off the Dolls' debut with a fist-in-your-face declaration of what was about to come, the band fronts its fourth studio album with an anthemic title track, a three-minute slice of street-tempered punk. Still, there's nothing on their first album to approach the blues swagger of "Ridiculous" or the spaghetti-western shimmer of "Temptation to Exist." Perhaps more telling is the Dolls' softer side, represented by the ballad "Better Than You," a tender/tough track that Paul Westerberg would be proud to call his own, and "Lonely So Long," a romantic blend of the Dolls and the Velvets. This ain't 1973, and the New York Dolls know it. That's why they skillfully avoid trying to recreate the snotty glory of their youth and craft a new testament to their grizzled wisdom and tenacious ability to survive. — Brian Baker