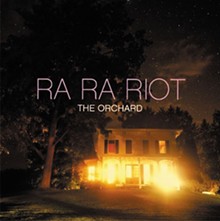 It's not totally fair to call the Syracuse-based chamber-pop group Ra Ra Riot a junior Arcade Fire. For one thing, there are only five people in Ra Ra Riot. For another, they don't aim quite as big as the way more popular Canadian collective. And that's often a good thing. Without Win Butler's arena-size anthems cluttering up their indie rock, Ra Ra Riot can focus on the little things that make the music on their second album so satisfying: the drifting strings, Wes Miles' gliding vocals, the way songs never really force the classical-pop arrangements. Death Cab for Cutie's Chris Walla and Vampire Weekend's Rostam Batmanglij provide some glistening adornment to The Orchard. But the best songs — the title track, "Boy," "You and I Know" (which sounds exactly like vintage Fleetwood Mac) — keep the occasional quirks to a minimum, instead emphasizing the subtle interplay among the cello, violin, and traditional rock instruments. It's no mistake the last song is called "Keep It Quiet." — Michael Gallucci