Welcome to the Movie Club, where the flicks are bad and the crowds are worse. 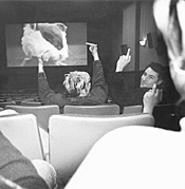 Walter Novak
The Movie Club: A finger on the pulse of American cinema.
All's quiet in Screening Room 10, as Welcome to Mooseport is readied for launch. It's Tuesday night at Tower City Cinemas, a time when parties of one often get entire theaters to themselves.

Within moments, the serenity of the preview trailers is unceremoniously shattered by the arrival of 30 sketchy characters who shuffle in noisily, engulfing the middle of the otherwise empty room. Mostly twentysomething men seemingly plucked from a fantasy-gaming convention, they launch into chatter immediately. Then, as Ray Romano's tepid comedy starts unspooling, the punks let fly.

"Show us your titties!" comes the first barb, lobbed as the leading lady appears onscreen.

Had any bystanders been caught in the crossfire, they'd have confronted the manager by now. And they would have found him in the back row, laughing along with the miscreants.

This screening belongs to the Movie Club.

"I love going in that theater, man," says the Tower City manager, who asked not to be named. "Our GM even said he'd like to be in on a Movie Club screening. If it wasn't at our theater, we'd go to see it."

A sort of cinematic organized crime, the four-month-old group is the creation of Cleveland nightclub-owner John Michalak. It convenes for Tower City screenings of the worst Hollywood schlock on the menu, devoting two otherwise useful hours to brazenly taunting the screen. The shows they pick are almost always devoid of other customers, which is probably for the best.

"This originally started as a joke," says Michalak, whose first three screenings have averaged 30 clubbers each. "But a lot of people had fun. We want to do this on a more regular basis."

Michalak looks 25, but is actually 39. Once the disheveled owner of Peabody's DownUnder, he's now a scrubbed-up businessman, the untamed hair and rebel yell replaced by a shave and smooth conversation. His business these days is Rain, the old-style tavern with the new-style crowd, perched just a Pabst's throw from the trendy section of Ohio City.

Michalak traces his film-mocking roots to his days in a mellow-rock band with Richard Patrick (later of Filter fame). To blow off steam accumulated from their marginal success, Michalak and Patrick would go to the movies, talking loudly to each other and laughing obnoxiously at the actors. Fellow audience members, he insists, ate it up.

Years later, when Michalak owned Peabody's, he'd venture into movies on weeknights, when crowds were thin at both the club and the theater. His epiphany came during Set It Off, the 1996 movie starring Jada Pinkett Smith and Queen Latifah. "Man, I was scared for my life -- I was the only white guy in there," he recalls. "There was a scene where this white girl was going to bust these black girls, and you hear 'Kill that white bitch! Kill her!'"

He takes a long pause. "It was the most awesome experience I ever had at the movies."

Michalak percolated his Movie Club concept over the ensuing years -- not that it should have required that long. New members simply sign up by e-mailing Michalak ([email protected]), who supplies the date, time, and movie for the next month's screening. Everyone then shows up en masse, yells spontaneous, generally crude comments at the screen, and ends the proceedings with an after-party at Rain. It's a little bit Fight Club, a little bit Mystery Science Theatre 3000. And it's always R-rated, even if the movie isn't.

"We're looking for the coolest of the coolest," says Harry Pallas, a Movie Club pro who sports the neatly shorn hair of Bay Village and the grunge attire of Coventry. "Movie Club takes a certain kind of person," he says, with blissful disregard for irony.

It also takes a certain kind of etiquette. Climbing over seats is encouraged. Attendees are expected to sneak in beer and potato chips. Everyone brings a cell phone -- turned on -- and each one of them seems to ring as if on cue.

"Honestly, for the theater, there are no pros to this thing," says the manager. "If my boss found out what I was letting happen, I doubt I'd be here much longer."

At the Paycheck screening, three non-club customers were subjected to the group's act. Their initial shock gave way to acceptance, then even laughter at times. By the March screening, Michalak made sure to call ahead, and Tower City played along: After a little subtle herding of filmgoers by the manager, the Movie Club's Moose calls bounced around an otherwise empty theater. The group had its fun, the theater cleared 300 bucks, and a few lucky bystanders were upgraded to a better movie. Everybody wins.

"As a purist, I'd be pissed that someone was ruining the movie," says Jonathan Forman, head of Tower City Cinemas and six other area theaters. "I sure as hell wouldn't want to sell a ticket to someone, knowing there would be 30 people yelling at the screen."

But Forman also acknowledges that for movie attendance, weeknights are poison. "Most theaters would be thrilled to have extra customers," he says, adding that he'd prefer to see the club organized by the theater, a sort of enter-at-your-own-risk night at the movies.

For now, though, it's still in the hands of Michalak, who's busy plotting the club's late-April excursion. With any luck, The Passion of the Christ should be empty by then.